Giving Emilia Lanier her own voice 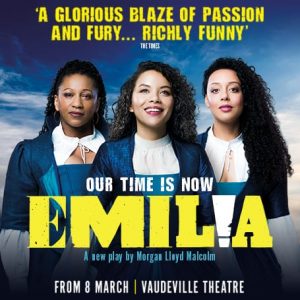 In 1973, historian A L Rowse declared in Shakespeare the Man that he had solved the greatest mystery in Shakespeare’s life, the identity of the Dark Lady of the Sonnets. She was, he said, Emilia Lanier (Aemilia Lanyer). Rowse’s starting point had been the references to her in the diaries of the physician Simon Forman, and other facts about her such as her Italian parentage, court connections, musical background and poetic writings all clinched it for him. While Rowse’s claims ensured publicity for her, it wasn’t all positive.  Rowse was dogmatic and eccentric, and could be rude towards his fellow academics ensuring there was little love lost between them. He was also rather cavalier with the facts, and it’s obvious that when Professor Stanley Wells found some basic errors in Rowse’s argument he took some pleasure in correcting him.  So although Rowse can be credited with shining a spotlight on Emilia Lanier, it was also quite easy to dismiss her.

The search for the Dark Lady had been a long one, beginning in 1797, when George Chalmers suggested the sonnets were addressed to Queen Elizabeth, and since then there have been many candidates including one of Queen Elizabeth’s maids of honour and the Abbess of Clerkenwell. Away from London, Jane Davenant, the wife of Oxford Vintner John Davenant, was another candidate. When their son William became a playwright gossipy John Aubrey noted that he “seemed contented enough to be thought [Shakespeare’s] son”.

This heated chase has taken up a huge amount of energy over the years, so it’s worth remembering that not only is there no evidence that any of these women actually knew Shakespeare, there is no evidence that there ever was a Dark Lady: her existence is pure supposition based on an autobiographical reading of the sonnets. The search however has shown how many interesting women did live in and around the royal court during Shakespeare’s lifetime.

This is particularly true of Emilia Lanier. We know that she was a talented writer because some of her poetry was published, she was a musician, and we know she had a complicated personal life. The dedications of her poems to several noble ladies show she had ambition and self-confidence. She lived through the turbulent years of 1569 right up to 1645, outliving all the men in her life. As she’s emerging out of the Dark Lady claims it’s becoming much easier to assess her in her own right.

Michelle Terry, now Artistic Director of Shakespeare’s Globe, has long been fascinated by Lanier and one of her first acts was to commission a play about her. Morgan Lloyd Malcolm’s play Emilia reached the Globe in the summer of 2018, performed by an all-female cast with three actors playing Emilia at different times of her life. Shakespeare does make an appearance but is a minor figure in what is very much her story.

Now the play is being given a significant run from March to June 2019 at the Vaudeville Theatre in  London.  There are reviews here and here of the original Globe performances. On 4 March the Radio 4 Today programme interviewed Morgan Lloyd Malcolm and the Globe’s Will Tosh here (2hrs 54 mins from the start of the programme). 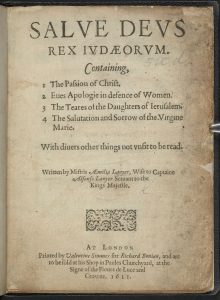 Lanier’s book of poetry, Salve Deus Rex Judaeorum, was published in 1611 and several copies still exist. Here are links to it and to an article about her poetry from the British Library.

This assessment of her importance is from the Poetry Foundation:

Aemilia Lanyer was the first woman writing in English to produce a substantial volume of poetry designed to be printed and to attract patronage. The volume comprises a series of poems to individual patrons, two short prose dedications, the title poem on Christ’s Passion (viewed entirely from a female perspective), and the first country-house poem printed in English, “The Description of Cooke-ham,” which precedes the publication of Ben Johnson’s “To Penshurst” by five years. Lanyer’s poetry shows evidence of a practiced skill. The volume is also arguably the first genuinely feminist publication in England: all of its dedicatees are women, the poem on the Passion specifically argues the virtues of women as opposed to the vices of men, and Lanyer’s own authorial voice is assured and unapologetic.

The Description of Cooke-ham is a less serious work than the rest of the volume, but these lines, celebrating the beauty of springtime, are appropriate for this time of year:

The little Birds in chirping notes did sing,
To entertaine both You and that sweet Spring.
And Philomela with her sundry layes,
Both You and that delightfull Place did praise.
Oh how me thought each plant, each floure, each tree
Set forth their beauties then to welcome thee!
The very Hills right humbly did descend,
When you to tread vpon them did intend,
And as you set your feete, they still did rise,
Glad that they could receiue so rich a prise.