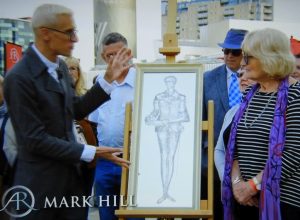 One of the first objects on the Antiques Roadshow on Sunday 17 March was a Shakespeare item that I found very familiar, a framed and mirrored glass panel by the artist John Hutton featuring the character of Hamlet. Hutton’s work is instantly recognizable in style, but this particular panel was even more unmistakeable because the final version of this piece decorates the front hall of the Shakespeare Centre in Stratford-upon-Avon that was the entrance to the Library where I worked for over 25 years.

The Shakespeare Centre was intended to celebrate Shakespeare’s 400th birthday not by attempting to recreate anything “olde worlde” but by featuring work inspired by Shakespeare by outstanding contemporary artists. It was a bold decision and very much of its time. John Hutton’s glass panels were some of the most admired features, each one showing a character or characters from the plays rather than portraits of any particular person. In this light it was interesting that the lady who owned the mirrored panel said that her husband had been the model for Hamlet. 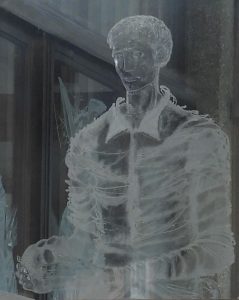 Hutton was chosen because he had just created the glorious glass west wall of Coventry Cathedral, completing this in 1962 immediately before this new commission. Hutton was a New Zealand-born artist who had lived in England since 1935. Dissatisfaction with existing techniques led him to experiment with new engraving methods which he used at Coventry and perfected at the Shakespeare Centre.

The Cathedral is also completely modern in character and execution, replacing the medieval building that had been bombed during World War 2. The Coventry Cathedral panels showed prophets, saints and angels, well above head height. One of the great attractions, and challenges, of the commission for Stratford was  that the panels would be seen close-up and, until they had to be protected by shatterproof panels, could even be touched.

It was important that non-specialists would be able to identify the characters and the list was as follows: Macbeth and Lady Macbeth, Hamlet and Ophelia, King Lear and Cordelia, Romeo and Juliet, Othello and Desdemona, Antony and Cleopatra, Julius Caesar, King Richard III, Falstaff, Titania and Bottom, Portia and Shylock. 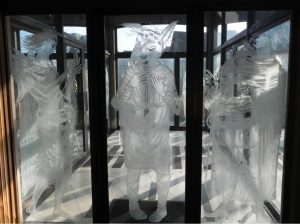 I’ve always particularly liked the A Midsummer Night’s Dream panels, representing Bottom with his ass’s head and Titania. Hutton described how when there were two figures he had “chosen those which are strongly related by emotional tension…In portraying Macbeth and Lady Macbeth, I have shown the hallucinations that their imaginations conjured up – in Macbeth’s case the dagger, and in Lady Macbeth’s the blood on her hands”. One of his most successful panels was also one of the most elusive: he beautifully captures the despair of Ophelia as she “hovers on the edge of sanity falling into madness”.

For him these were not abstract, but figures with “humanity and passion”. His aim was to “try and pay tribute to the extraordinary variety of interpretation offered by Shakespeare’s characters”.

The late Marian Pringle made a study of many of the works of art in the building. She describes how the artist worked:

“Each design demanded different techniques that Hutton developed as he worked. He used a modified dentist’s drill with a small grinding wheel and a series of larger stones. Dust was controlled by a small damp sponge resting lightly on the glass, with a vacuum cleaner nozzle alongside. First drawings were created by chalk on black paper, and on the glass Hutton sought to retain the effect of chalk, with a variation of depth to the engraving. In this way Caesar’ s face was chiselled out of the glass, Falstaff’s fleshy folds were achieved by vigorous polishing with emery papers, and a coarse grinding wheel deeply modelled and created the rough textures for Richard III. The artist was always intrigued by the way light worked on glass, and how the changing background as the viewer moved would alter the impression of the character. Occasionally he needed to adjust details to be sure that, for instance, a smile did not become a smirk when seen from a different angle.” 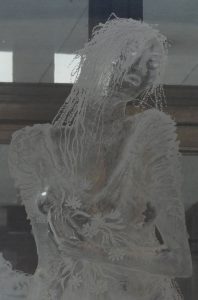 It was a difficult technique. Rubbing out was not possible, though some panels were revised as work progressed. But his preparation was thorough, involving an outline sketch, a finished drawing, and a life-sized drawing in chalk that was the blueprint for the actual engraving. In the case of the Hamlet panel it seems that a small version of the final glass image was also created. The panels were created in the artist’s studio in Maida Vale and installed at the centre just weeks before the building was opened in April 1964. They remain some of the most attractive features of the Henley Street building and although they are no longer easy to view several of them can be seen from outside. As you will be able to see, they are very difficult to photograph!

Note: The late Dr Levi Fox, the Shakespeare Birthplace Trust’s Director, commissioned John Hutton’s work. Hutton’s quotations are taken from correspondence between the two men and appear in Fox’s 1997 book The Shakespeare Birthplace Trust:  A Personal Memoir.  The episode of the Antiques Roadshow is available on BBC IPlayer until the middle of April 2019, the section on the glass just 4.5 minutes from the start.