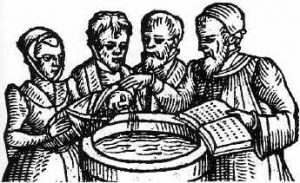 So although we can’t know exactly when Shakespeare drew his first breath, we do know that Shakespeare’s parents, godparents and other members of the family made their way down to the church from the Birthplace with the baby on 26 April. Tourists today still follow the route that they would have walked, now known as the “cradle to grave” route, ending up at the font which can still be seen in the church. Here little William, perhaps “mewling and puking”, was given his Christian name and welcomed into the church. 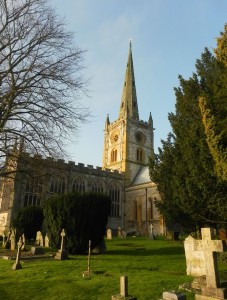 It was normal for babies to be christened within a few days of birth so the 23rd April would be perfectly possible. As Samuel Schoenbaum remarks in his Documentary Life, “that date is irresistibly attractive, coinciding as it does with the feast of St George” whose day had been celebrated in England for centuries before Shakespeare’s birth. It’s an auspicious day but again Schoenbaum reminds us that “the wish is father of many a tradition”. It goes back a long way, with antiquarian William Oldys and Stratford curate Joseph Greene independently writing down the date during the early eighteenth century, but it seems that the first printed reference to the 23rd April came in 1773. Shakespeare’s status as National Hero had already been established well before this date: the Westminster Abbey monument of Shakespeare was erected in 1741.

The reason for christening the very young was the importance laid on ensuring that the baby had entered the Christian family. Infant mortality was high and by 1564 his parents had already lost their first two children. The bare records show that Joan had been born in 1558, and Margaret in 1562. Joan does not have a separate burial record, perhaps implying she died shortly after birth, but Margaret lived for about five months, her burial occurring in the spring of 1563. The records are the only evidence we have: we can only speculate about how and why they died, and how their parents might have felt. The memory of Margaret’s burial just a year before must have made William a particularly cherished child. 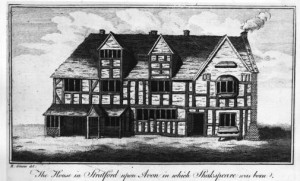 The earliest image of Shakespeare’s Birthplace

It’s recorded in the parish register that plague began in Stratford on 11 July 1564 and biographers have suggested that as a result the three-month old William might have been taken to stay in the village of Wilmcote with his mother’s relatives, where he would be safe. Nearly all the deaths recorded in the register are from families within the town. The danger was real:  Roger Green, who also lived in Henley Street, lost four children that summer. The town council, including John Shakespeare, met out of doors in August, rather than inside the Guild Hall,  to discuss how to help relieve those families affected by the plague.

Behind the facts written down in the parish records lie the human stories of people’s lives. On 26 April we are able to mark one of the few firm dates in Shakespeare’s early life. We don’t know how the family celebrated after the christening but it must have been a joyful day for the Shakespeare family who could never have guessed that centuries later, we would still be honouring their baby’s life and achievements.