Shakespeare and the moon 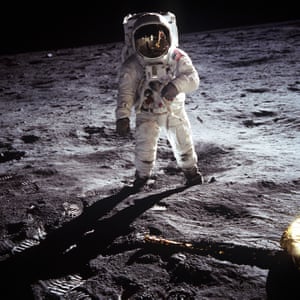 It’s fifty years since the first moon landing in July 1969, and most people who were alive at the time must have memories of it. My father woke me up to watch Neil Armstrong become the first human ever to tread on the surface of the moon, and I remember the capsule returning to earth. Later we went to London to see samples of moon-rock displayed in a glass case in a museum. It was hard to relate the dull fragments of rock to the glamorous Apollo missions and the beauty of the moon itself. My other strong memory though is of gazing at the moon while the astronauts were there. How would their expedition change how we felt about our moon?

The beautiful, mysterious moon has always fascinated us. Its link to the tides has been known for centuries, and the phases of the moon were thought to influence other aspects of life on earth such as the growth of plants. Some thought that weeds should be pulled up at the moon’s wane and apple trees pruned as it was waxing or increasing. Thomas Hill believed in gardening by the moon: in The Gardener’s Labyrinth(1652), he notes that herbs like rocket, parsley and oregano should be sown as the moon is increasing, and new strawberry plants should be set as it waned. It was supposed to influence the weather: Thomas Tusser in 1580 wrote a little rhyme about it:

Shakespeare, as a countryman, must have heard all these superstitions, but we can’t know if he believed any of them. In King Lear Edmund dismisses his father’s worries about the power of lunar eclipses to affect events on earth, but in Richard II the Welsh Captain believes what is prophesied by disturbances in the skies:

The bay-trees in our country are all withered,
And meteors fright the fixed stars of heaven,
The pale-faced moon looks bloody on the earth,
And lean-looked prophets whisper fearful change…
These signs forerun the death or fall of kings.

Drawn by Thomas Harriot in c1611, shows a map of the surface of the moon. Petworth Estate & Lord Egremont PHA HMC 241/9

I wonder how much Shakespeare actually knew about the moon. During his lifetime one of the many advances in science was the invention of the telescope in 1608 by German/Dutch Hans Lippershey. Galileo quickly adopted his ideas and improved them, building a telescope with which he could examine the moon and planets of the solar system. This knowledge quickly made its way to England: in 1611 Thomas Harriot drew this map of the moon’s surface, a document now in the Petworth Estate’s archives.

Shakespeare would surely have been interested to see this map, though his own references to the moon are for dramatic effect, particularly in the play most closely associated with the moon and its influence, A Midsummer Night’s Dream. Shakespeare seems to be determined to throw in as many references to the moon as he can and to remind us of our many, conflicting views of it. It’s a symbol of love, of madness, of chastity, to be feared or laughed at.

We’re told right at the start of the play that the marriage of Theseus and Hippolyta is to take place on the day of the new moon, connecting the event with this serious ritual. And Theseus then speaks some of Shakespeare’s most romantic lines: 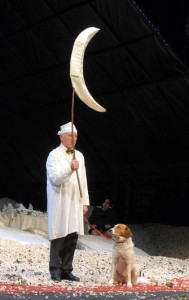 Starveling from the Austrian Burgtheater production in 2007

Four days will quickly steep themselves in night;
Four nights will quickly dream away the time:
And then the moon – like to a silver bow
New-bent in heaven – shall behold the night
Of our solemnities.

Hermia’s punishment for defying her father may be to face a life of chastity, “chanting faint hymns to the cold fruitless moon”. The moon is also a source of comedy, appearing in human form in the play Pyramus and Thisbe. For the literal-minded mechanicals the fact that Pyramus and Thisbe met by moonlight demands it. “This lanthorn doth the horned moon present;/Myself the man i’th’moon do seem to be”.  Poor Starveling, as the moon, is a figure of fun to his audience who constantly interrupt him as he tries to get his lines out.

Then at the close of the play Puck, a figure derived from English folklore, reminds us that the moon could also be dangerous.

Now the hungry lion roars
And the wolf behowls the moon,
Whilst the heavy ploughman snores
All with weary task foredone.

Shakespeare understood the complexity of our relationship to our mysterious moon. It’s become no simpler since men have stood on its surface. We still stare and wonder at its beauty, just as people have done for millennia.