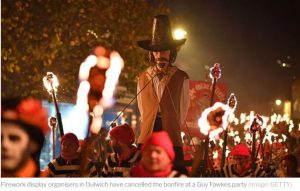 Guy Fawkes Night, or Bonfire Night, celebrated in the UK on 5 November, marks the anniversary of an attempt to blow up Parliament in 1605 while Shakespeare was living and working in London. Macbeth was his strongest response to the shocking events, but the plot must have had a subconscious impact into the lives of Londoners in the years that followed, colouring political and social life. The Thanksgiving Act, passed by Parliament at the end of 1605, made sure it was not forgotten, with annual church services to commemorate the failure of the plot being held for the next 200 years. I wrote about some of the long-term impact of the Plot back in 2014

Even now the events of Guy Fawkes Night, or our way of celebrating them, are related to current events.  Checking back over my posts, I found that for instance in 2011 Guy Fawkes masks were worn by protestors trying to “Occupy Wall Street”, and a few years ago Donald Trump’s effigy was burned in London.

Gunpowder, treason and plot: Guy Fawkes and the Shakespeare connection

In the last couple of years global attention has shifted to the impact of COVID 19 and climate change. 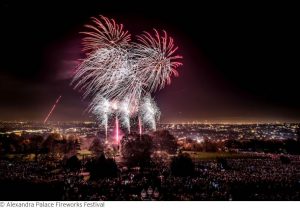 Last year this article noted the spike in airborne pollution caused by fireworks. Most organised displays were cancelled in 2020 to avoid crowds gathering during the COVID 19 outbreak, but this may have resulted in more fireworks being let off in back gardens across the country.

This year, 2021, Bonfire Night coincides with the COP 26 conference in Glasgow. The pollution caused by fireworks is probably small compared with other sources but this article from 2018 notes that it’s often the most polluted night of the year, and in 2010 “estimated emissions from bonfires lit for Guy Fawkes celebrations were greater than those created by municipal waste incineration over the entire year”. It is suggested that the effects were not just short term, the extra pollutants in the atmosphere contributing to “the detrimental impact to the health of the planet”.

We might think this is a modern problem, but this post by Sarah Hovde from the Folger Shakespeare Library notes that even in Roman times there were concerns about the effects of fires on air quality, and that in 1661, just a few decades after Shakespeare’s time, John Evelyn wrote a treatise against air pollution called Fumifugium, and proposals to reduce pollution were discussed by Parliament. Shakespeare might not have recognised our twenty-first century problems associated with global warming, but he knew that “rheumy and unpurged air” was bad for our health, just as fresh air and the natural world was good for it.