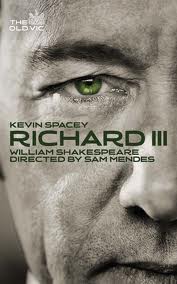 One of this summer’s hottest theatre tickets will be Kevin Spacey’s performance as Shakespeare’s most famous villain Richard III, currently previewing at the Old Vic in London.

In a Radio interview with Spacey and his director, Sam Mendes it’s clear that the production will not be ducking the play’s contemporary resonance, especially the parallel with Colonel Gadaffi hanging on to power in Libya by any means.

It also includes some extremely rare recordings of Henry Irving, Laurence Olivier and Tony Sher, all famous Richard IIIs, performing the opening speech “Now is the winter of our discontent”. It’s going to be fascinating to see what Kevin Spacey makes of what the interviewer describes as this “cunning, conniving, charismatic king”.

Olivier’s film, and his own delivery of this speech, was so famous that Peter Sellers performed this wicked parody, reciting the words of the Beatles’ A Hard Day’s Night in Olivier’s famous style. Part of a Granada TV special The Music of Lennon and McCartney from December 1965 the show was hosted by the Beatles and featured other pop stars of the day such as Billy J Kramer and the Dakotas and Marianne Faithfull.

Can you imagine any comedian doing something like this today?  It’s a hoot particularly when compared with Olivier’s version of the original which, as well as the Irving version, is on YouTube. (Thanks to Carolyn Porter for reminding me of this great clip!)

I was reminded by one of the comments I received on my post on the new play Dunsinane that Shakespeare showed scant regard for the historical accuracy of his plays. Both Macbeth and Richard III took as their starting point Raphael Holinshed’s great historical survey. It’s quite right that an artist should be allowed to interpret his source material. There’s a place for accuracy and proper documentation, but a play, novel or painting shouldn’t be judged by how closely it has stuck to its source. 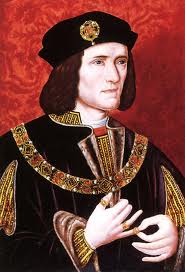 In the case of both these kings it’s Shakespeare’s version that has come to be accepted. It’s been particularly damaging for the reputation of Richard III, Shakespeare’s “bottled spider”, a psychopathic tyrant and child-killer. In order to counter the influence of Shakespeare’s play the Richard III Society was set up, which tries to remind people of the real man.  The society mission is “to promote, in every possible way, research into the life and times of Richard III, and to secure a reassessment of the …role of this monarch in English history”.

The Battle of Bosworth Field is on 22nd August 1485 is the where Richard was finally defeated and killed. It’s one of the most famous of English battlesites, but surprisingly little is known about it. Even the exact location of the battle is still disputed and full information is on the Battlefields Trust website. The Bosworth Heritage Centre has been nominated in the National Lottery Awards for best Lottery-funded heritage project, and is looking for more votes, so do pay them a visit.

It’s a pity that the historic Richard III is remembered for all the wrong reasons, but I can’t be sorry that Shakespeare wrote the play that immortalised him. What do they say about no publicity being bad publicity?