Shakespeare and the French 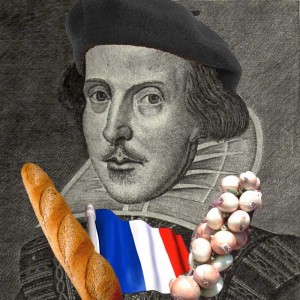 Today has been Bastille Day, and a day for thinking about Shakespeare in France. Shakespeare’s Globe has been running a competition on Twitter regarding which of his plays Shakespeare set in France. The question isn’t as simple as it appears. As well as the plays which dramatise historical events that take place there like Henry V and Henry VI Part 1 there’s the question about to what extent other plays are really set there. As You Like It’s probably the best example. Orlando’s described as “the stubbornest young fellow of France”, but the characters are deliberately given names from a variety of sources: Audrey, Corin, Celia, Dennis, Rosalind, Adam, Amiens.  In the forest is a snake and a lioness, palm trees, oaks and brambles.

In 2010 BBC Radio 4 Today’s April Fools Day joke was a piece suggesting that one of the finds in the dig then taking place at Shakespeare’s last home, New Place, indicated that Shakespeare had been French. Nothing, they realised, was more likely to wind up early morning listeners than the idea that their national poet was from across the channel.

Even back in Shakespeare’s day, perhaps originating in the Norman invasion of 1066 (yes I know the Normans weren’t really French, but let’s not get pedantic), the English and the French didn’t get on. Shakespeare’s French characters are usually pompous and arrogant, certainly touchy. The English don’t speak their language and the French speak English badly. Shakespeare wrote a comic scene about the French princess’s attempts to learn a few words of English in Henry V, balanced at the end of the play with Henry’s own poor attempts to make himself understood in French.

Shakespeare’s most comic Frenchman is Doctor Caius, the hot-headed physician who lives in Windsor and becomes involved in the complicated farce surrounding Falstaff and those merry wives of Windsor, Mistress Ford and Mistress Page. His chief character trait is his anger: anger with his servant John Rugby, with Mistress Quickly his housekeeper, and irritation with everyone and everything. But it’s his misunderstandings of the meanings of words and his way of mispronouncing English words with a French accent so they sound rude that make this part such a gift for an actor. Many leading actors have chosen to play this part rather than the more obvious role of Falstaff. 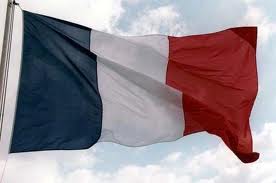 No wonder the eighteenth century French writer Voltaire criticised Shakespeare for his lack of sophistication: almost every reference to people from France is either insulting or makes them the butt for jokes about bodily functions or bits of our anatomy that we don’t usually talk about.

Shakespeare may be unkind about the French, but he doesn’t underestimate the value of the country itself.  The Duke of Burgundy, in Henry V, describes the country as “this best garden of the world, our fertile France” and when Princess Katherine and Henry talk, she asks him:

Is it possible dat I sould love de enemy of France?

This entry was posted in Plays and Poems, Shakespeare's World and tagged As You Like it, Doctor Caius, France, French, language, Shakespeare, Shakespeare's Globe, The Merry Wives of Windsor. Bookmark the permalink.

One Response to Shakespeare and the French