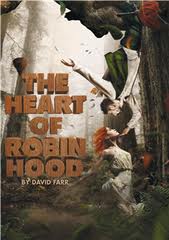 At Christmas, the RSC traditionally gets into party mood by putting on a special show. This year the company has two: Matilda in London, after its successful premiere in Stratford last year, and The Heart of Robin Hood, at the newly-transformed Royal Shakespeare Theatre.

The list of shows put on as Christmas treats, either in London or Stratford, is a long one with some notable successes. The first and most-repeated was Toad of Toad Hall, an adaptation of children’s classic The Wind in the Willows. First performed in theStratford theatre in 1948, it was regularly repeated until the mid 1950s, then revived in 1972 and 1973. It always had the feel of an end-of-term party, featuring actors who had been acting Shakespeare all year. In 1973, for instance, Mole was played by David Suchet.

In 1976 Wild Oats, though not specifically a Christmas play, was revived in London, giving many of the company’s serious actors the opportunity to show their lighter side. 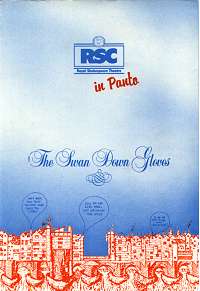 It was in January 1981, though, that a completely home-grown, full-blown pantomime was given three performances at the end of the Stratford1980-81 season. It had been a heavy year: Romeo and Juliet, Hamlet, Richard II and Richard III, with only As You Like It to provide light relief. No wonder there was such enthusiasm for the company to collectively let their hair down.

The Swan Down Gloves was an exuberant Shakespearean pantomime, the story-line loosely revolving around the idea of taking a pair of gloves (Shakespeare’s father being a glover) to London for Queen Elizabeth. Bille Brown, who wrote the play, had been playing a range of small parts: Barnardo in Hamlet, Le Beau in As You Like It, Lovel in Richard III, giving him plenty of time to observe, and to get writing.

It came complete with principal boy, Dame, Buttons, songs, dancing, and awful jokes. Bille Brown wrote himself a jewel of a part as the evil Griselda Brimstone.  There were in-jokes and misquotations, especially from Hamlet and Richard III.

From the cast of Romeo and Juliet, Juliet (Judy Buxton) became the principal boy, The Nurse, Lady Capulet and Lady Montague collectively became the Dandini brothers, and Benvolio became Buttons. It must have come as a particular relief for the actors in Richard III to move into comedy, Lady Anne, Queen Margaret, Clarence and the Duke of Buckingham all transformed. Joe Melia, who played one of the murderers in the Shakespeare moved up by donning Richard III’s costume and declaring “a hose, a hose, my kingdom for a hose”. 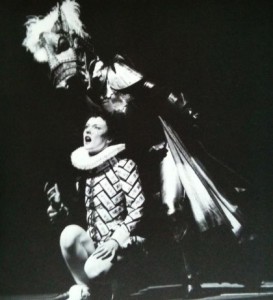 Julia Tobin and Alan Howard in The Swan Down Gloves

Actors who’d played small parts were allowed to shine. Terry Wood burst effusively onto the stage as the Pantomime Dame and Julia Tobin was a pocket-sized Earl of Southampton. The biggest joke of the evening was the sad figure of George the Silent Dragon, encased in armour from head to toe, played by the normally anything-but-silent Alan Howard, the Richard II and Richard III that season. At the climax of the play he removed his helmet, regained his voice and dispelled the evil-doers.

During the 1980s a series of Christmas shows were created for the RSC’s London home and Peter Pan, Poppy and A Christmas Carol were only performed there. Meanwhile the musical Kiss me, Kate, based on Shakespeare’s The Taming of the Shrew was performed in Stratford and The Wizard of Oz, adapted from the film by John Kane, was performed from 1987-9 in both London andStratford.

In 1998 Stratford became the focus of Christmas shows again. The first and most successful was The Lion, The Witch and The Wardrobe, performed over five years in Stratford and London. While the cast varied, Patrice Naiambana made the role of Aslan his own. While this was being performed in London in 2000 and 2001 Stratford had its own Christmas shows, The Secret Garden and Alice in Wonderland. 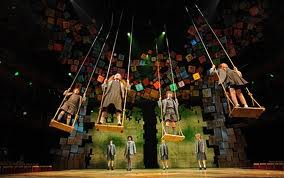 Under Michael Boyd’s leadership the Christmas tradition continued with Beauty and the Beast and Great Expectations. The Canterbury Tales, in the Swan Theatre, wasn’t really a Christmas show but was high on entertainment. In 2006, as part of the Complete Works Festival, The Merry Wives of Windsor was turned into a musical, with Dame Judi Dench as an apparently somersaulting Mistress Quickly and Simon Callow as Falstaff. While the transformation of the theatres took place Christmas shows continued: Fantastic Mr Fox in the town’s Civic Hall, and the Arabian Nights and Matilda in the temporary Courtyard Theatre.

I know this list is incomplete, but I hope I might have stirred some memories of Christmas past. You can find details of all the cast lists on the RSC Performance Database.

3 Responses to Celebrating Christmas with the Royal Shakespeare Company