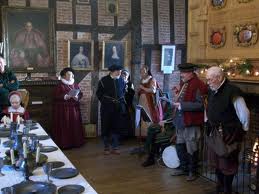 Now we’re getting really near to Christmas, let’s have some music to get us in the mood. In A Midsummer Night’s Dream, Titania contrasts the long summer evenings with the cosiness of winter round the fire:
The human mortals want their winter cheer;
No night is now with hymn or carol blest

Carols are the music most closely association with Christmas, but most of the carols we now sing come from the Victorian period, and even those that are earlier, like God Rest Ye Merry, Gentlemen, and The Holly and the Ivy, probably don’t go back to Elizabethan days. 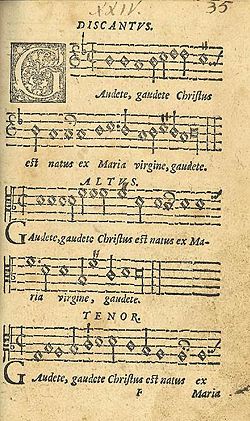 Trying to think of Christmas songs from Shakespeare’s time that we still know, I remembered Gaudete, which had a revival when it was recorded by the electric folk band Steeleye Span back in 1973, one of the few songs in Latin to make the top 20. It was first composed in the sixteenth century. Here’s a recording from the group’s 35th anniversary concert showing that Maddie Prior hasn’t lost her amazing voice.  And here’s a version by the Irish choir Anuna.

This recording of carols includes some that are traditional as well as more modern compositions: it’s by the Elizabethan Singers, and called Sir Cristemas: Carols Newly Composed and Arranged. You can hear each track by clicking on it.

Thomas Tusser’s Five Hundred Points of Good Husbandry made its first appearance in 1557 and remained popular for decades. Its verses contain advice on farming, country life and religion. It’s not great poetry, but it has charm. He describes the spirit of Christmas celebrations, including carols.
Of Christ cometh Christmas, the name with the feast,
A time full of joy to the greatest and least:
At Christmas was Christ (our Saviour) born;
The world through sin altogether forlorn.

At Christmas the days do begin to take length,
Of Christ doth religion chiefly take strength.
As Christmas is only a figure or trope,
So only in Christ is the strength of our hope. 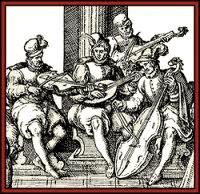 At Christmas we banquet, the rich with the poor,
Who then (but the miser) but openeth his door?
At Christmas of Christ many Carols we sing,
And give many gifts in the joy of that King.

At Christmas in Christ we rejoice and be glad,
As only of whom our comfort is had:
At Christmas we joy altogether with mirth
For his sake that joyed us all with his birth.

This is the first of a series of Christmas-themed posts which I hope you’ll enjoy over the next couple of weeks.