Shakespeare and the birds at Christmas

There’s no doubt that Shakespeare loved the birds he saw and heard around him. He refers time and again to their behaviour, and particularly their song. Romeo and Juliet disagree over whether they hear larks or nightingales, in Macbeth, the crow makes wing to the rooky wood, in Hamlet ravens croak for revenge, and he repeats the legend that at Christmas time the cock, crows all night: 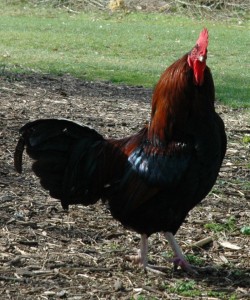 Some say there ever ‘gainst that season comes
Wherein our Saviour’s birth is celebrated,
The bird of dawning singeth all night long,
The nights are wholesome, then no planets strike,
No fairy takes, nor witch hath power to charm,
So hallowed, and so gracious is that time.

These are just a few of Shakespeare’s many mentions of birds. At this time of year we celebrate the robin, partly because of its festive red breast, but also because it’s one of the most friendly of birds visiting our gardens all year round. There’s a legend that robins got their red breasts by trying to remove the thorns from Christ’s head during the Crucifixion, drops of blood falling on the bird. They have a reputation for being charitable, and it’s said to be very unlucky to kill a robin.

In Cymbeline, when Imogen, disguised as the boy Fidele, is thought to be dead, her brother Arviragus says:
The bird is dead
That we have made so much on.

He goes on to refer to the story that the robin (here called a ruddock) uses its bill to cover bodies with leaves and flowers, as in the story of the Babes in the Woods. 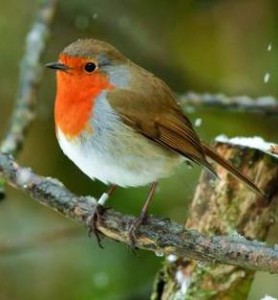 The Ruddock would
With charitable bill – O bill sore shaming
Those rich-left heirs, that let their fathers lie
Without a monument! – bring thee all this;
Yea, and furr’d moss besides.

The bird that’s most associated with this time of year is the wren. On St Stephen’s day, the 26th December, the wren was hunted and killed. Although linked with a saint’s day, the tradition probably dates back to pagan times when the killing was seen as a midwinter sacrifice to ensure the return of the sun. Some versions of the story say that the wren was killed by being stoned to death, the same fate that met Saint Stephen. In many languages its name means king, and even though it’s one of our smallest native birds and normally reclusive, they can be belligerent, especially when attacked. Lady Macduff complains that her husband has abandoned his family rather than staying to defend them: 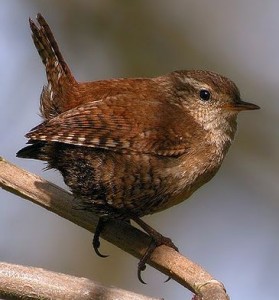 He wants the natural touch; for the poor wren,
The most diminutive of birds, will fight,
Her young ones in her nest, against the owl.

As so often, Shakespeare shows himself to be an acute observer of nature as well as incorporating stories he would have heard in his youth. He would be saddened by the decline in our native birds over the last few decades, so while you’re enjoying your Christmas feasting, remember to feed the birds.

One Response to Shakespeare and the birds at Christmas