How to tame your falcon – and your wife 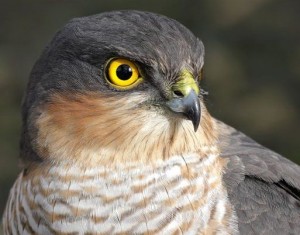 A few days ago I was in a car travelling along a main road near Stratford-upon-Avon when a bird shot across the road then continued to fly alongside it at the bottom of the hedgerow, at the same speed as the car, perhaps 40mph. It was a real Earthflight moment without the need for microlites, gliders or silent drones. This magical view of the bird in flight went on for about 10 seconds, and was all the more special because it was a wild male sparrowhawk.

Sparrowhawks are some of our smallest and commonest birds of prey. It’s some years now since I had another encounter with a female sparrowhawk which was found, dead, but quite perfect, at the bottom of our suburban garden. It had probably broken its neck while chasing a small garden bird. It was a rare privilege to be able to see it close up: the deadliness of its long, sharp talons and curved beak, the barred wing feathers which act as camouflage in woodland where the birds normally hunt.

These birds were common in Shakespeare’s day when like other birds of prey, they were kept for hunting. Hawking was a popular pastime, and different birds were flown by different ranks in society. The following list in the Boke of St Albans, dating from around 1486 is probably not meant to be taken literally, but suggests the suitability of birds for people of all ranks from rulers right down to knaves.
An eagle for an Emperor, a gyrfalcon for a King,
a peregrine for a prince, a saker for a knight,
a Merlin for a Lady, a goshawk for a yeoman,
a sparrowhawk for a priest, a musket for a holy water clerk,
a kestrel for a knave. 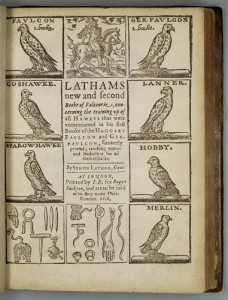 Many of these birds are illustrated on the title page of Latham’s 1615 Book of Falconrie. If you’re interested in stunning bird photography, take a look at the RSPB’s website.

Here’s a link to an article about the history of hawking by Richard Grassby and another to a page of Shakespeare references to the sport.

The Royal Shakespeare Company is about to mount a new production of The Taming of the Shrew, a play in which Shakespeare makes a connection between a man’s attempt to tame his wife and the training of a hawk. It’s not by any means his only reference to the sport, but it is the most obvious. There have been calls in recent years for the play not to be performed, so distasteful does this seem to us, but in many of the contemporary stories of wife-taming, the husband usually administered violent beatings. Petruchio’s attempt “to kill a wife with kindness” is comparatively mild, because it was well known that training a bird of prey could not by done by cruel means.
My falcon now is sharp and passing empty,
And till she stoop she must not be full-gorg’d,
For then she never looks upon her lure.
Another way I have to man my haggard,
To make her come and know her keeper’s call. 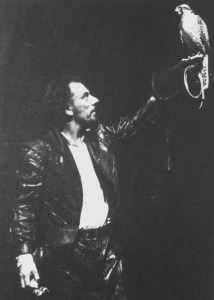 Alun Armstrong as Petruchio with the unhooded falcon

In the 1982 RSC production Alun Armstrong, playing Petruchio, made sure nobody missed the point by delivering this speech while carrying a hooded bird of prey on his wrist. A murmur went round the auditorium as the audience realised the bird was real. As he gently removed the bird’s hood allowing it the freedom to look around everybody held their breath, an unforgettable theatrical moment.

This entry was posted in Plays and Poems, Shakespeare on Stage, Shakespeare's World and tagged Alan Armstrong, falconry, Petruchio, Shakespeare, sparrowhawk, The Taming of the Shrew. Bookmark the permalink.

5 Responses to How to tame your falcon – and your wife