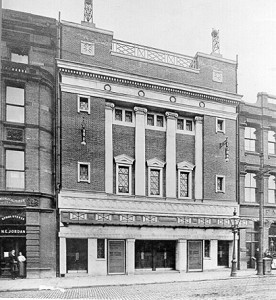 This week it’s been confirmed that a new and vastly expensive high speed rail link between Birmingham and London is to go ahead. Known as High Speed 2, or HS2, it’s expected to open in 2026, and a second phase, extending to Leeds and Manchester, will open in 2032-3. The journey time from Birmingham to London will be reduced to 49 minutes from the current 72, and Birmingham will become a national hub for rail travel as it is for road travel.

As well as offering improvements for those involved in commerce and industry, it’s hoped that there will be cultural benefits. Birmingham is England’s second city, but in spite of successes such as Symphony Hall, the best concert hall in the country, Birmingham isn’t taken very seriously as a cultural centre. The city’s history is dominated by its industrial heritage. The new Library of Birmingham due to open in 2013 will hopefully help to establish the city’s reputation in the arts, not least by creating a direct physical connection to the city’s Repertory Theatre.

On Tuesday Claire Cochrane from the University of Worcester talked to the Shakespeare Club in Stratford-upon-Avon about one of the high points in Birmingham’s cultural history, the groundbreaking work done in the first half of the twentieth century by Barry Jackson.

Jackson was born in 1879, inheriting his love of Shakespeare and theatre from his wealthy merchant father. The directors William Poel and Edward Gordon Craig were major influences on him, and Jackson spent eighteen months in Europe before being articled to a firm of architects back in Birmingham. He poured his own money into the theatre, founding the amateur company the Pilgrim Players, then in 1913 building the Birmingham Repertory Theatre.

The building was radical in design, shaped like a shoebox with most of its seats in a single steep bank directly facing the stage. With a seating capacity of less than 500, it was never intended to be a theatre for the people, but Jackson’s money allowed experimentation that none of the commercial theatres in either Birmingham or London would have been able to attempt. 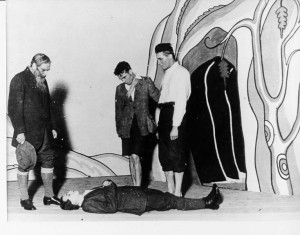 The Birmingham Rep became famous for innovation: in 1923 it staged the first major production of Shakespeare in modern dress, Cymbeline, and premiered many new plays including Bernard Shaw’s Back to Methuselah. Several other modern-dress productions followed, the best-known being Hamlet in 1925, opening in London before being performed in Birmingham. The theatre became famous for what was known as “Shakespeare in plus fours”, plays receiving this treatment including Macbeth and The Taming of the Shrew. Jackson worked closely with a small team: H K Ayliff was his main director and Paul Shelving designed hundreds of productions. The Rep became famous for giving talented young actors their first breaks: Laurence Olivier, Ralph Richardson and John Gielgud all worked there in this period, later followed by Paul Scofield, Albert Finney and Derek Jacobi, and the director Peter Brook. 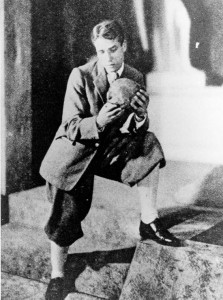 Barry Jackson was knighted in 1925 for his services to the theatre, but his career was by no means over. He led the Shakespeare Memorial Theatre in Stratford-upon-Avon for two seasons in the late 1940s, and never lost contact with the Birmingham Rep which he had made one of the most famous theatres in the world. He died in 1961.

Jackson’s Rep was superseded in 1971 by the opening of a larger, more modern building. Ironically that building is now being remodelled as part of the new Birmingham Library project and the Old Rep, now approaching its centenary, is being used again. By chance it’s reminded Brummies of the city’s famous theatrical tradition at just the time when Birmingham is trying to re-establish its cultural credentials.

One Response to Innovating in Birmingham: Barry Jackson and modern dress Shakespeare