Daniel Radcliffe and the story of child actors: Young Roscius comes of age 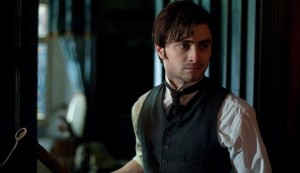 Daniel Radcliffe in The Woman in Black

Harry Potter star Daniel Radcliffe is making the transition to adult actor, starring in the newly-released film The Woman in Black. He seems to have survived the experience of spending his teenage years acting in this successful series of films quite happily.

Exploiting the talents of children in the entertainment business is now done with more sensitivity than in the past. I wrote a few weeks ago about the clown Joseph Grimaldi who was put on the stage by his father from the age of two, and in the early nineteenth century quite a number of children were put on stage by their parents. 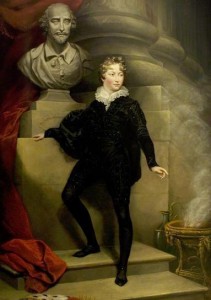 The most famous was Master Betty, the Young Roscius, “The Wonder of the Age” who was the toast of London from his first appearance aged 11 in 1804 until 1806. At one point the competition was so great that he appeared at both Covent Garden and Drury Lane theatres on succeeding evenings. Master Betty performed in whole plays, the rest of the cast adults, his best Shakespeare roles being Hamlet and Romeo. It’s clear from satirical cartoons such as the 1804 engraving by Rowlands called Theatrical Leap Frog that Master Betty was a serious threat to even the greatest Shakespeare tragedian of the day, John Philip Kemble.

Shakespeare knew all about the threat to adult actors of children. In Hamlet, the “tragedians of the city” are forced to go on tour because of the popularity of children on stage. It’s a reflection of actual events as for a while companies like The Children of Paul’s offered adult companies like Shakespeare’s serious competition.
There is, sir, an eyrie of children, little eyases, that cry out on the top of question and are most tyrannically clapped for’t. These are now the fashion.

Although also the fashion in the early 1800s, the interest in child performers continued for decades. They included in 1805 “the Infant Billington and Roscius, Miss Lee Sugg, (not seven years of age), who is honoured with the patronage of Her Majesty and their Royal Highnesses the Prince and Princess of Wales. [In] Edinburgh… her infantine efforts were honoured with the most flattering applause for thirty-one nights.” As part of her performance she recited the The Seven Ages of Man speech from As You Like It and “To be or not to be” from Hamlet. 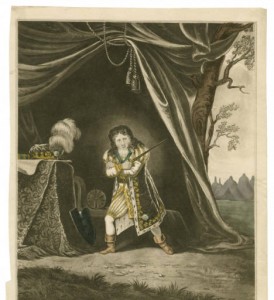 Master W R Grossmith was another Infant Roscius, as he got older becoming the Young Roscius, performing until around 1830, when he was said to be 11 years old. His biography was published in 1825. On his appearance in Stratford in 1830 his “laughable entertainment” included several extracts from Shakespeare such as the dagger scene in Macbeth, Shylock, and several scenes from Richard III. Such was the popularity of young actors that Master B Grossmith, possibly his younger brother, also put on his show in Stratford’s Town Hall in 1835.

In 1830 Master Henry Herbert, yet another Infant Roscius, was thought to have achieved such distinction, aged only seven and a half, that an eighteen page biographical account of his life was published.

No wonder Dickens satirised the business of child performers in Nicholas Nickleby. The daughter of Vincent Crummles, known as the Infant Phenomenon, is supposedly ten years old and “the idol of every place we go into”. Dickens comments:
The infant phenomenon, though of short stature, had a comparatively aged countenance, and had moreover been precisely the same age…for five good years. But she had been kept up late every night, and put upon an unlimited allowance of gin-and-water from infancy, to prevent her growing tall.

Writing in the late 1830s when children as young as six were being sent down the mines it’s unlikely Dickens meant readers to see this as cruel.

As a young adult, Daniel Radcliffe is now looking for new challenges, and he too could do worse than trying his hand at Shakespeare on stage.

PS The boys of King Edward’s School in Stratford are performing Thomas Dekker and John Webster’s play Westward Ho! on 7,8,9,10 March. The play was originally staged by the Children of Paul’s. Edward’s Boys have a great reputation for performing plays by Shakespeare’s contemporaries, and this will be a great opportunity to see what boys can do!

One Response to Daniel Radcliffe and the story of child actors: Young Roscius comes of age