The Phoenix and Turtle: Shakespeare’s Valentines 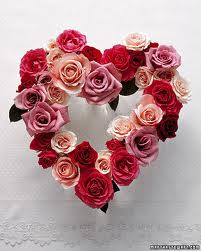 Today we are celebrating St Valentine’s day by giving flowers, chocolates and cards decorated with symbols of hearts and roses to those we love. Traditionally it’s the day when birds pair up for the mating season, and Chaucer, writing in the Parlement of Foules (1382), put it in writing. Shakespeare refers to the story in A Midsummer Night’s Dream, when Theseus finds the lovers asleep in the woods:
Saint Valentine is past;
Begin these wood-birds but to couple now?

In mid-February there may be little sign of spring on the ground, but the 14th signals the beginning of the end of winter. Back in January this year there were already indications that birds were getting in the mood with courtship displays, and now the weather is warming up again the birds are resuming their pre-nuptial activities.

I thought I would celebrate St Valentine’s day by looking at one of Shakespeare’s least-known poems that celebrates the true and faithful love of two birds, The Phoenix and Turtle. The birds are the mythical Phoenix, which rises afresh from the ashes of fire, and the turtle dove, a symbol of fidelity. At the end of The Winter’s Tale Paulina, a widow, likens herself to a dove:
I, an old turtle,
Will wing me to some wither’d bough, and there
My mate (that’s never to be found again)
Lament till I am lost. 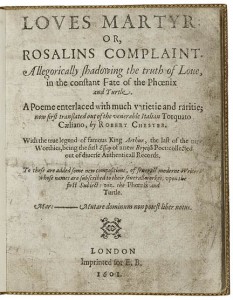 The title page of Loves Martyr, in which The Phoenix and Turtle was first printed

The Phoenix and Turtle is mysterious work. It is thought to have been written in 1600, and appeared in a collection of poems published in 1601, Loves Martyr or Rosalins Complaint. Its form is unlike other poems by Shakespeare, and though obviously deeply allegorical its actual meaning is far from clear. Some have read it as a political allegory on the love of Queen Elizabeth and Essex. Others have suggested it alludes to the dedicatee of Loves Martyr, Sir John Salisbury. Or it may have a religious interpretation: the relationship between the birds, as lovers, symbolising the holy trinity. The Folger Shakespeare Library contains an essay on the poem.

Only 67 lines long, the poem begins by calling on “the bird of loudest lay” to be a herald to bring other birds, “every fowl of tyrant wing”, to mourn the death of the Phoenix and the turtle, who symbolised the virtues of love:
Love and constancy is dead;
Phoenix and the turtle fled
In a mutual flame from hence.

It goes on to describe the birds’ mutual love:
So they love’d, as love in twain
Had the essence but in one:
Two distincts, division none;
Number there in love was slain.

Hearts remote, yet not asunder;
Distance and no space was seen
‘Twixt this Turtle and his queen:
But in them it were a wonder.

So between them love did shine
That the Turtle saw his right
Flaming in the Phoenix’ sight;
Either was the other’s mine. 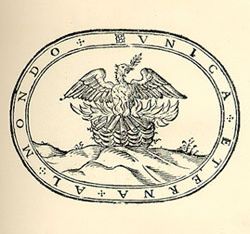 The mythical Phoenix arising from the flames, from an Emblem book

The poem ends with the Threnos, or funeral song:
Beauty, truth and rarity,
Grace in all simplicity,
Here enclos’d, in cinders lie.

Death in now the Phoenix’ nest,
And the turtle’s loyal breast
To eternity doth rest.

Leaving no posterity,
‘Twas not their infirmity,
It was married chastity.

Truth may seem, but cannot be;
Beauty brag, but ‘tis not she;
Truth and beauty buried be.

To this urn let those repair
That are either true or fair:
For these dead birds sigh a prayer.

Unusually formal in style, the poem relies as much of Shakespeare’s work does on metaphorical allusions to birds. John Masefield said that “This poem gives to a flock of thoughts about the passing of truth and beauty the mystery and vitality of birds, who come from a far country, to fill the mind with their crying”.

In his edition for the Arden Shakespeare F T Prince suggests that in the poem “Shakespeare has compressed all his feeling for pure passion and loyalty in human love”, a fitting sentiment for St Valentine’s day.