The last of the actor-managers taking Shakespeare on tour: Donald Wolfit 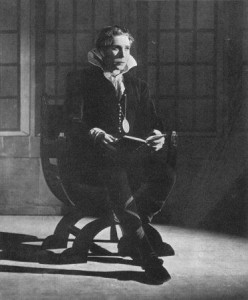 Until relatively recently theatrical companies in England were run by actor-managers who performed with their own companies in London, at theatres in the regions, and abroad. According to Hesketh Pearson, in his book The Last Actor-Managers, “most of them won their reputations by playing the great Shakespearean characters; and though they often adapted the plays…it was entirely due to them that Shakespeare, or mangled Shakespeare, held the stage from the reign of Charles II to the reign of George V.”

Pearson’s book was published in 1950. He estimated the cut-off point for the actor-manager came at the end of the 1914-18 war. Among those he wrote about were Sir Herbert Tree, Sir Frank Benson, Lewis Waller, and Oscar Asche, all born between 1850 and 1890 and all strong-willed characters. Pearson’s opinion was that although actor-managers had not been perfect,  “the daring of an individual is preferable to the discretion of a committee”.

Donald Wolfit, born in 1902, was too late to truly be an actor-manager, though by temperament he belonged to this group. In spite of early success working at major theatres like the Old Vic, he always felt himself to be an outsider and yearned for his own company. In 1936-7 he spent two seasons at the Shakespeare Memorial Theatre in Stratford-upon-Avon. In his first season his varied roles included Orsino in Twelfth Night, Cassio in Julius Caesar, Gratiano in The Merchant of Venice, Ulysses in Troilus and Cressida and Kent to Randle Ayrton’s magnificent King Lear. His Hamlet gained him national recognition. In his autobiography, First Interval, he wrote about the curtain-call for his first performance:
How well I remember that first Hamlet at Stratford, the opening of the great parti-coloured curtain and the step forward to find out whether the great struggle in Hamlet’s sould had really been imparted to the audience.

He became famous for his curtain-calls at which he always appeared exhausted, holding on the curtain for dramatic effect. In 1937 he repeated his Hamlet and added Iachimo in Cymbeline and the Chorus in Henry V.

All called for the vocal skill and powerful personality which Wolfit had in abundance. During his years in Stratford he met and fell in love with the actress Rosalind Iden, and heartened by his success he created a theatre company of his own using actors who he had worked with in Stratford. From 1937 onwards touring became a way of life for him. He performed right through the war, aiming “to be the switch that could set the electric current of Shakespeare’s poetry and imagery throbbing through a crowded auditorium”. Between 1937 and 1945 he estimated he had undertaken 2240 performances of 15 different plays in countries including Canada, the USA, Egypt, France and Belgium and continued to tour after the war. 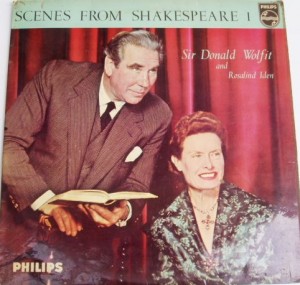 Donald Wolfit and Rosalind Iden’s recording of Scenes from Shakespeare

Receiving a knighthood in 1957 brought him respect, particularly abroad. According to Ronald Harwood’s article in the Dictionary of National Biography:
Wolfit believed in the theatre as a cultural and educational force. His contribution was immense, for he provided people all over the British Isles, especially during the war, with the opportunity of visiting a playhouse, perhaps for the first time, and seeing Shakespeare with the leading roles played by an actor of extraordinary gifts.

He did have extraordinary gifts, even though his declamatory style was, and has remained, out of fashion on home ground. He undertook a new tour of the provinces and travelled to Kenya and Ethiopia where he and his wife Rosalind performed “a programme of extracts from their Shakespearian repertoire”, for which they became renowned. From 1959-60 They toured to Australia, New Zealand, India, Kuwait and Beirut, a journey of 29,000 miles.  In 1963 he performed in South Africa and Zimbabwe, visiting Harare, Cape Town and Johannesburg, insisting on giving a performance for non-whites. He also visited Kenya again, where he was seen by a young Felicity Howlett. This is her memory of his visit: 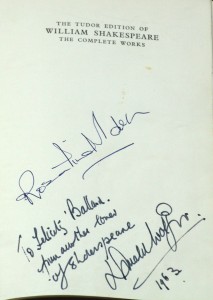 My father was the lighting director at the National Theatre, Nairobi and in 1963 Sir Donald Wolfit and his wife, Rosalind Iden, were invited to Nairobi to give some of their pieces from Shakespeare.
They gave some wonderful, nowadays I would think “over-the-top”, performances.  I particularly remember the death scene from ‘Othello’ and the mad Lear.
I was about 14 at the time and had never seen anything quite so captivating and I used to stand in the wings watching in awe.  One night as Donald Wolfit came off stage he patted me on the head and said “do you like Shakespeare, little girl”.  I simply nodded, too taken aback, by this great actor actually speaking to me, to say anything!
When they came to leave Nairobi they presented me with a signed copy of the Complete Works which has become my most treasured possession.

Felicity Howlett’s Complete Works open at Hamlet, with part of the original cover

The inscription reads “from another lover of Shakespeare”. Ronald Harwood’s play and film The Dresser was based on his experiences as Wolfit’s dresser, and his observation, repeated in his biography, confirms Felicity’s impressions and that delightful inscription:
He developed a majestic persona, grandiose, passionate, often pompous. He could be frightening and brutal but also astonishingly kind and genuinely humble.

It may have belonged to a previous era, but his barnstorming style made a big impact, not least on Felicity in whom Wolfit inspired a life-long love of Shakespeare. She has lived for many years in Stratford-upon-Avon where she continues to follow the RSC’s work, and I would like to thank her for sharing her story and photographs of her treasured copy of the Complete Works with me.

One Response to The last of the actor-managers taking Shakespeare on tour: Donald Wolfit