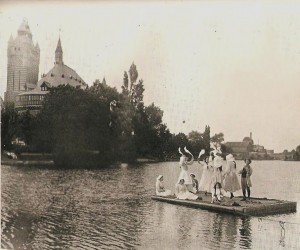 Morris dancing on the Avon in The Shakespeare Revival

I have on my shelves a book entitled The Shakespeare Revival: the Stratford-upon-Avon Movement, probably acquired by my father in a second-hand shop years ago.  It’s always puzzled me.

The book was published in 1911, and seems to expect the reader to know about something known as the Stratford-upon-Avon Movement, and to understand why Shakespeare needed a revival. But even after years of being surrounded by Shakespeare in Stratford it was a mystery to me. What was this movement, and what happened to it? And who was the author, Reginald R Buckley? As I’m researching the history of Shakespeare celebrations in Stratford I felt this was the moment to find out.

The book’s and message is evangelical. The introduction is written by the Director of the Shakespeare Festivals, F R Benson, in which he outlines his dream for the Stratford festival: “On to the green of the Bancroft dance the singing children of Stratford and the neighbouring villages. Young and old to the number of some thousands follow after to see the final ceremony, to tune their hearts to the rhythm of the final dance, and carry back to their homes the human harmony of the final song”.

He imagines Stratford becoming the centre of world reconciliation, based on Shakespeare and the Anglo-Celtic race. “the discipline of the Teuton, the primitive vigour of the Slav, the enterprise of the Scandinavian, the mystic reverence of the Oriental”.  The main part of the book is a section by Buckley entitled “The Nature of Drama”, with chapters on such subjects as “The Spirit of Shakespeare”, “A Temple of Dreams: a personal reverie”, “Wagner and his relation to Shakespeare”, and “Choral art and the Theatre”. The final section is by Mary Neal with chapters on The Stratford-upon-Avon Festival Movement and its Developments and The Revival of Folk Art. The book ends with advice on “How to take part in the Movement”.

Dedicated to the governors of the SMT it appears to have been a plea for them to throw their weight behind the movement. I consulted a recently-published book, The Celtic Revival in Shakespeare’s Wake, by Adam Putz, that suggests Buckley had a very political aim, based on the socialist ideas of Ruskin and Morris. Indeed Frank Benson’s foreword says as much, without actually mentioning politics: “I am very proud to be asked to write a Foreword to a work published by a firm so long associated with the name of John Ruskin. Proud that our work at Stratford should be regarded… as part of that campaign against the unloveliness of modern life”.

Putz also suggests that both Benson and Buckley use the language and celebration of Shakespeare to promote an “image of Britain’s imperial supremacy”. Benson certainly draws on the idealised image of Stratford as part of old England: “through a frame of rush and willow, yew and cedar and elm, the spire of the church looks down on the mill where Celt, Roman, Saxon and Dane, Norman and Englishman for centuries have ground their harvest”.

Since 1905 folk traditions had been part of the Benson’s Shakespeare festivals, with Elizabethan dancing, Morris men, Maypole dancing and wrestling. They reached a peak in 1911, the same year the book was published. A month-long Summer School of Folk-song and Dance took place between under the direction of Cecil J Sharp between 22 July and 19 August. Over two hundred participants came to Stratford from Scotland, France, Canada, England, the USA and Holland. The participants’ days were spent learning and performing folk songs and dances, listening to lectures, and exhibitions were given by a number of participants. 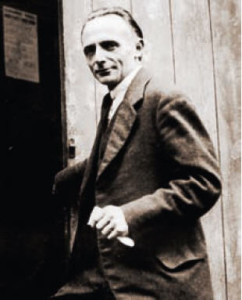 Searching for information about Buckley, I discovered he was a poet and author who often worked as a librettist with the socialist composer Rutland Boughton. Together in 1908 they co-wrote a book, The Music Drama of the Future and, much influenced by the Wagner and the Bayreuth festivals they collaborated on a choral drama entitled The Birth of Arthur. They first discussed setting up a theatre in Letchworth Garden City, and the Rutland Boughton Music Trust still exists. Their website contains a great deal of information about Boughton who was one of the most prolific of English composers, dying in 1960.

Stratford, with Benson’s enthusiasm for the folk movement and allied Celtic Revival, was another possible venue, hence The Shakespeare Revival. It appears, though, that Stratford-upon-Avon did not warm sufficiently to these ideas, and in 1914 Boughton instead founded the first ever Glastonbury Festival which continued annually until 1926, supported by Edward Elgar and George Bernard Shaw. Although Glastonbury didn’t then have its New Age reputation it was already a magnet for those interested in Arthurian legend. There is to be a celebration of the centenary in Glastonbury at the end of August. 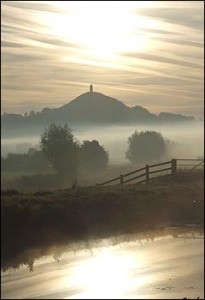 The biggest success of the Glastonbury Festival was The Immortal Hour, first performed just after war had been declared, on 26 August 1914. In 1922 the opera received 216 consecutive performances and was restaged in New York a few years later. In London the opera launched the career of the young Gwen Ffrangcon-Davies who went on to be a memorable Juliet in Shakespeare’s play. It’s a fantasy, in which magic and spirits play important parts. Fairies are not the mischievous imps of A Midsummer Night’s Dream, but proud, immortal demigods. The Finborough Theatre in London is currently staging a centenary production of The Immortal Hour that will run between 10 and 26 August.

And remembering that this week we are commemorating the start of the First World War, here is a link to a poem by Reginald Buckley which he published on 13 August 1914, days after war had been declared.

And finally, since posting this I’ve been informed about two other books: Michael Hurd’s Rutland Boughton and the Glastonbury Festivals, and a book due to be published soon by Roger Savage on twentieth century music dramas.  I hadn’t realised when I began this post how much active interest there is in this subject.