Celebrating Shakespeare and the Birthday Play 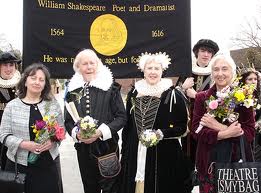 I recently wrote about the launch of Shakespeare’s Celebrations, a new organisation that is breathing new life into the celebration of Shakespeare’s Birthday in Stratford-upon-Avon. The story can be traced back to David Garrick’s Shakespeare Jubilee even though, taking place in September 1769, it did not coincide with the birthday itself. Garrick’s Jubilee was also an event imposed on the town by the leading actor of the day who attracted members of London society. After the Jubilee locals hoped to keep an annual festival going but attempts fizzled out after a few years.

It was 1816 when for the first time celebrations were organised on the probable date of Shakespeare’s birth, 23 April. Local historian Robert Bell Wheler wrote to the Gentleman’s Magazine “It may be some gratification to your readers, to learn that the anniversary of Shakespeare’s natal day was not silently disregarded at Stratford-upon-Avon; but that the Bard’s townsmen have, as far as local circumstances would allow, (and what more could be reasonably expected of them?), testified their sense of the honour exclusively belonging to this town.” Bells were rung, cannons were fired, and in Shakespeare’s Hall a public breakfast, luncheon and ball were held. During the evening there was a “brilliant display of fireworks on the Bankcroft, attended by a band of musick”.

Then in 1824 the Shakespearean Club was founded specifically to organise the Birthday Celebrations. When researching the early history of the celebrations I was pleasantly surprised to find that many of the members of the Club’s committee were not the local gentry but small businessmen, among them grocer James George and butcher William Tasker. They introduced events to be enjoyed by everybody, in particular the procession of costumed characters, first held in 1826. Then as now the intention was to balance the honouring of Shakespeare’s work and fame with the promotion of commerce in the town.

In the twenty-first century the economic benefits of tourism to the area are well known. A report released in July 2013 by the Heritage Lottery Fund revealed that heritage tourism’s importance to the UK was increasing. Robin Tjolle, Destination Manager for Shakespeare’s England commented, “We estimate that 4.9m people a year visit the Stratford-on-Avon district and our wide variety of tourism businesses help to generate more than £335 million of spend per year into the local economy which supports over 8000 jobs.”

On Shakespeare’s Birthday the eyes of the world are on Stratford and media attention reaches a high. It’s still important to strike that balance and to honour Shakespeare in a fittingly respectful way. 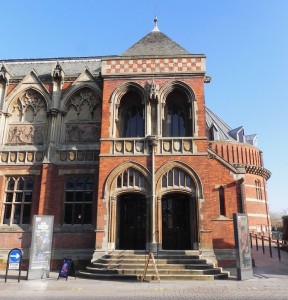 The entrance to the original Shakespeare Memorial Theatre

Early celebrations never included a performance of an entire play, but with the opening of the Shakespeare Memorial Theatre in 1879 the tradition of the Birthday Play was founded. Its inaugural performance, of Much Ado About Nothing, was the first Shakespeare Birthday Performance, taking place on 23 April.

The only break in this tradition was 1917-1918 when the country was in the depths of World War 1. During the early years it became customary to perform one of the plays rarely performed, so Troilus and Cressida, Henry VI part 1, and Timon of Athens each got an airing. On 23 April 1932 the new Shakespeare Memorial Theatre was opened by the Prince of Wales who saw Henry IV, Part 1,in the afternoon, while Part 2 took place in the evening after the royal party had departed.

Until 1972 the Birthday was celebration on the actual day, 23rd, unless it fell on a Sunday when it moved to the 22nd. But since 1973 the celebrations have been held on the Saturday nearest the 23rd April (occasionally having to avoid the Easter weekend).

In recent years the play performed has been simply one of those in the repertoire, and Much Ado About Nothing has been the most consistently popular. Even though it’s one of Shakespeare’s most popular plays Richard III has been performed just once, and there are a few plays in the traditional canon that have never been performed as the Birthday Play: Titus Andronicus, Henry VI part 3, and surprisingly, Julius Caesar. 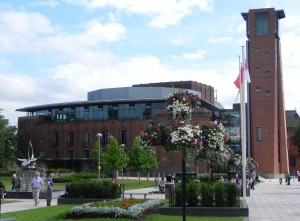 It’s always been a Shakespeare play – but in 2015 the RSC are breaking the tradition by performing a month-long run of The Death of a Salesman to mark the centenary of the birth of great American playwright Arthur Miller.

Even if you’ve never attended, I would encourage you to support Shakespeare’s Celebrations to help ensure the continuation of these historic celebrations that honour the world’s greatest playwright in the town of his birth.