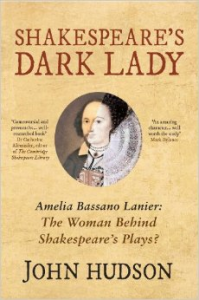 Everybody loves a mystery, and one of the most persistent is the identity of Shakespeare’s so-called Dark Lady. (It’s by no means certain that there ever was such a person).I wrote a couple of years ago about this story, particularly as a result of Aubrey Burl’s book Shakespeare’s Lover. So popular is the story that authors have used it to promote their own favourite theories or obsessions.

I was interested to see John Hudson’s new book Shakespeare’s Dark Lady, which looks at the case for Emilia (or Amelia) Lanier, the candidate championed by historian A L Rowse in the 1970s. Hudson has come up with an even more surprising suggestion, that Emilia Lanier actually wrote Shakespeare’s plays. Burl, promoting his own favoured candidate Mrs Aline Florio, dismisses Lanier as nothing more than “a name written by an optimistic quill”. But Hudson, in a “data-driven approach” that includes diagrams and lists of necessary qualifications for “Shakespeare” concludes that Emilia had every qualification while “other candidates are not plausible”.

Needless to say I’m not greatly persuaded by this argument, but what Hudson’s and Burl’s books succeed in doing is examining the lives of women in the Elizabethan period. The Queen was not the only woman who was educated, intelligent and knew how to get her own way. Many of the women who have been suggested as the Dark Lady either married or became the mistresses of powerful men through whom they had influence. Emilia Lanier was the mistress of Henry Carey, Lord Hunsdon, Lord Chamberlain and patron of Shakespeare’s company, and in 1611 became one of the first women in England to publish her own collected poems, Salve Deus Rex Judaeorum, one of which was a religious poem of 1,840 lines.  The Wikipedia entry on her includes lots of information, a bibliography and links to her poetry.

Little of her poetry is quoted in the book, probably because it doesn’t help his cause. “Even a quick glance will reveal that some, perhaps most, of the verse in the Salve Deus collection is not very good”. He then goes on to state it is “deliberately bad”, unlikely given the poem’s religious subject, its dedication to “all virtuous Ladies” and  the dedicatory verses to aristocratic ladies including the queen.  Here are a few lovely lines:
Sweet holy rivers, pure celestial springs,
Proceeding from the fountain of our life,
Swift sugared currents that salvation brings,
Clear christall streams, purging all sin and strife,
Faire floods, where souls do bathe their snow-white wings,
Before they fly to true eternal life.

Hudson’s conclusion is the “As our world slowly becomes less racist, less sexist, and less religiously dogmatic, perhaps the time has come at last for her story to get a hearing.” Lanier was a remarkable woman whose achievements should be acknowledged for what they were rather than making her out to be something she wasn’t. 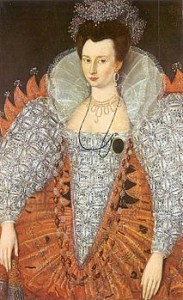 One of the earliest candidates for Dark Lady, identified in 1884, was Mary Fitton. She was a maid of honour to the queen who became the mistress of one of those powerful men, William Herbert, 3rd Earl of Pembroke, but her pregnancy in 1600-1601 had severe consequences for them both.

George Bernard Shaw knew of the popularity of the subject when he came to write a piece to help raise funds for a National Theatre in 1911. In his short play The Dark Lady of the Sonnets, Shaw shows no interest in the mystery, though he uses Mary Fitton’s supposed candidacy as his dark lady is named Mary. In the play, there’s a running joke about Shakespeare stealing lines from those he meets including a Beefeater, the dark lady and a mysterious cloaked lady who turns out to be Queen Elizabeth, with reference to Hamlet and Sir Andrew Aguecheek. Elizabeth’s agonies of guilt for the death of Mary Queen of Scots inspire Shakespeare to write lines for Macbeth: “Mary. Mary. Who would have thought that woman to have had so much blood in her!…Mary’s buried: she cannot come out of her grave”.

Eventually the Dark Lady leaves Shakespeare and the Queen alone, and he asks for what he really wants. ” The boon I crave is that you do endow a great playhouse, or, if I may make bold to coin a scholarly name for it, a National Theatre, for the better instruction and gracing of your Majesty’s subjects”. And why? The playhouses in the capital are only interested in commercial plays. 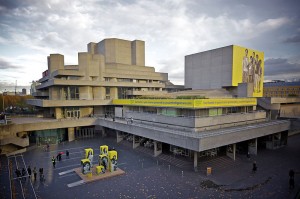 I have written two noble and excellent plays setting forth the advancement of women of high nature and fruitful industry even as your Majesty is: the one a skilful physician, the other a sister devoted to good works. I have also stolen from a book of idle and wanton tales two of the most damnable foolishnesses in the world… I have writ these to save my friends from penury, yet shewing my scorn for such follies…by calling the one As You Like It, meaning that it is not as I like it, and the other Much Ado About Nothing, as it truly is. And now these two filthy pieces drive their nobler fellows from the stage, where indeed, I cannot have my lady physician presented at all, she being too honest a woman for the taste of the town. Wherefore I humbly beg your Majesty to give order that a theatre be endowed out of the public revenue for the playing of those pieces of mine which no merchant will touch.

Sadly Shaw’s persuasive plea for a National Theatre, came to nothing until the end of not one but two world wars when as prophesied by the Queen in Shaw’s play, the government did “learn that man cannot live by bread alone”.