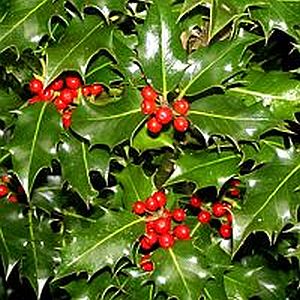 Over Christmas we fill our houses with fresh flowers and plants: I’ve been able to enjoy lilies and hyacinths in full bloom, specially appreciating them at this cold, dark time of year. Spare a thought then for Shakespeare and his contemporaries who had to make do with native evergreens, particularly holly, ivy and mistletoe. Even today these plants that flourish when plant life otherwise appears dead, symbolising the continuity of life, have a strong hold on us at Christmas time.

Best of the three is holly, with its shiny, dark foliage and red berries, at its best in winter: no wonder, in the old song, “the holly bears the crown”. In his book Flora Britannica, Richard Mabey notes holly’s “slight aura of magic” as well as its practical uses as winter shelter for livestock and as boundary trees.

There are many myths about holly: that it’s unlucky to cut a holly tree down, that a tree near the house protects against witches and that a holly branch brought into the house at Christmas would bring good luck. In her book on English folklore and customs Margaret Baker reports that on Twelfth Night, known as Holly Night, the townspeople of Brough in Westmorland “tied torches to every branch of a holly… carried in procession.”.

According to Mabey,“Bringing in evergreen boughs to deck out barns and houses in midwinter is a custom which goes back to pre-Christian times. Holly, especially, with its sharp spines and red berries held throughout the winter, was seen as a powerful fertility symbol and a charm against witchcraft and household goblins. (It was, ironically, also seen as a masculine plant, despite the berries being carried solely on female trees). The custom was easily accommodated by Christianity, holly standing for the crown of thorns and the berries for Christ’s blood. Yet echoes of the old religion linger, and there is still a fixed – and widely respected – routine for taking down the Christmas greenery”.

One of my favourite Christmas cards this year features the artist Walter Crane’s illustration of holly from the book Flowers from Shakespeare’s Garden, accompanied by a line from a song in As You Like It “Heigh-ho! Sing heigh-ho! Unto the green holly”. The book was published in 1906. All the flowers and plants are portrayed in human form. There are flowers like primroses, herbs such as thyme and rosemary and even the cereals wheat, rye and barley, mostly shown as rather languid young women. Holly is one of the best, a vibrant, dancing young man. 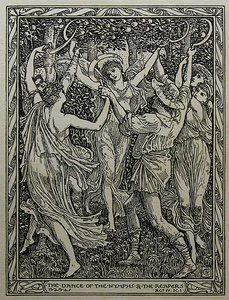 The nymphs and reapers from The Tempest, by Walter Crane

Walter Crane was born in 1845 and became one of the most successful and best-loved book illustrators of his time, specialising to illustrations for children. During a long career he was influenced by the Pre-Raphaelites, worked with William Morris and was founding president of the 1887 Arts and Crafts Exhibition Society that aimed “to give opportunity to the designer and craftsman to exhibit their work to the public for its artistic interest and thus to assert the claims of decorative art and handicraft to attention”. In the 1890s, before he tackled the Flowers of Shakespeare, he illustrated a number of Shakespeare’s plays, most famously The Tempest. He also designed posters for performances at London theatres including a Shakespeare season by the Benson Company. Hopefully his life and career will be celebrated in 2015, the centenary of his death.

Shakespeare’s song refers to holly’s life-giving power even in the  harshness of winter: 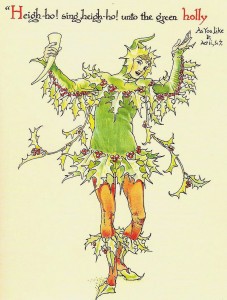 Blow, blow, thou winter wind,
Thou art not so unkind
As man’s ingratitude;
Thy tooth is not so keen,
Because thou art not seen,
Although thy breath be rude.
Heigh-ho! sing heigh-ho! unto the green holly.
Most friendship is feigning, most loving mere folly.
Then, heigh-ho, the holly! This life is most jolly.
Freeze, freeze, thou bitter sky,
That dost not bite so nigh
As benefits forgot;
Though thou the waters warp,
Thy sting is not so sharp
As friend rememb’red not.
Heigh-ho! sing, &c.

The mumming play I wrote about last time concluded with the traditional carol, The Holly and the Ivy, thought to date back to at least the 1700’s.  Here is a video of the Ilmington Morris Men performing it outside the Red Lion, and one version of the words.

The holly and the ivy, when they are both full grown,
Of all the trees that are in the wood, the holly bears the crown.
Refrain: Oh, the rising of the sun and the running of the deer,
The playing of the merry organ, sweet singing in the choir.

The holly bears a blossom as white as lily flower,
And Mary bore sweet Jesus Christ to be our sweet saviour
Refrain

The holly bears a berry as red as any blood,
And Mary bore sweet Jesus Christ to do poor sinners good.
Refrain

The holly bears a prickle as sharp as any thorn,
And Mary bore sweet Jesus Christ on Christmas Day in the morn.
Refrain

The holly bears a bark as bitter as any gall,
And Mary bore sweet Jesus Christ for to redeem us all.

This entry was posted in Legacy, Shakespeare's World and tagged Arts and Crafts movement, As You Like it, evergreen, flowers, Flowers of Shakespeare, holly, Richard Mabey, Walter Crane. Bookmark the permalink.