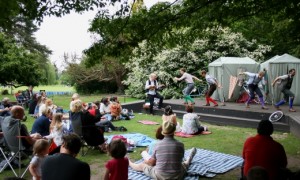 Open air Shakespeare at the Dell

The summer of 2015 has been mostly chilly and often damp, with just the occasional hot days. These conditions must have been trying for all those companies that now put on outdoor theatre productions in the UK. Many of them include at least one Shakespeare play, and no wonder: Shakespeare wrote his plays knowing that some of the time they would be performed outside, in a variety of touring conditions. It’s been another cold, rainy day, but the weather looks as if it may improve for the Bank Holiday weekend at the end of August. There are still a few opportunities to grab some outdoor Shakespeare even if you would be well advised to bring along a blanket and waterproof.

In Stratford, the Dell near Holy Trinity Church will see afternoon performances of As You Like It by BMH and Twelfth Night by Combat Veteran Players on Saturday and Sunday.

The Illyria Theatre Company are still on tour with The Taming of the Shrew and will be in Winchester and Newbury over the weekend. 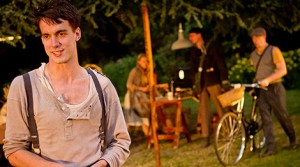 Creation Theatre are performing their production of As You Like It in the gardens of Lady Margaret Hall, Oxford, until well into September.

Handlebards are performing Hamlet in Scotland, taking their Secret Shakespeare to another level as the audience are expected to get on their bikes and ride five miles during the show.

The Festival Players continue their tour of As You Like It and Henry IV at various venues including Glastonbury. 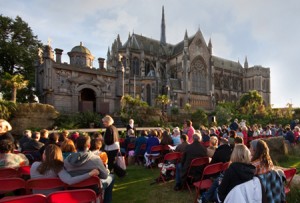 The GB Theatre Company are performing the final nights of their Twelfth Night on 28 and 29 August in the spectacular setting of Arundel Castle in Sussex.

If you need some encouragement to think about outdoor Shakespeare, you might like to try Andrew Muir’s delightful study of the Cambridge Shakespeare Festival, Shakespeare in Cambridge. It makes a refreshing change from some of the rather dry academic studies of Shakespeare on stage. The author remembers to mention Cambridge’s early connections with Shakespeare. Performances of Hamlet were staged in the city: the 1603 Quarto tells us the play “hath beene diverse times acted …in the two universities of Cambridge and Oxford.” Around the same time the student dramas, the Parnassus Plays, were put on by the students at St John’s College. These contain references, although somewhat cryptic, to Shakespeare as both actor and writer. He also points out that Francis Meres, one of the first to praise Shakespeare in print, was educated at Pembroke College Cambridge.

But the main part of the book, and what makes it such a pleasure to read, is Muir’s obvious love for Cambridge’s Annual Shakespeare Festival. Quite simply, he says “The Cambridge Shakespeare Festival (CSF) has changed my life. Not only has it come to dominate my every summer, but, more importantly, it has challenged and refocused my views of Shakespeare’s plays while reinvigorating my appreciation of them”. 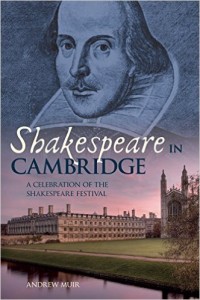 Shakespeare in Cambridge by Andrew Muir

Muir’s account of how the open air productions at CSF help to demonstrate the workings of Shakespeare’s plays would be a clear and readable account for anyone coming to the subject for the first time:
All the companies prior to, and in, Shakespeare’s time were obliged to change their productions to suit whatever locations and conditions they found themselves in. …With its almost total lack of scenery, other than what nature provides, its varied venues and its small casts, the CSF is at the mercy of the same exigencies… It sounds from all this as though the productions, both back then and now at the CSF, suffer from terrible constraints but, paradoxically, the opposite is true. The release from any obligation to provide naturalistic stage productions is liberating, and the absence of such cluttering distractions affords a total concentration on the words. These words, the greatest ever written, are designed to paint in our minds, if we let them guide us, all the scenery necessary for this and other worlds.

The liberation is boundless: the plays can move anywhere or any time via words, gestures, and symbols… The actors move, and the audience with them, simply by someone saying, “we are in a forest”, or an orchard, a castle, or “we are in Rome”, now Egypt and now Rome again. They can go from room to room, upstairs to downstairs, inside a house to out in the street, they can cross the street to enter a tavern or be held deep in a dungeon, all through language only. Even though, in reality, they are physically occupying the same bare stage, be it the thrust stage of the Globe, an Elizabethan courtyard inn or a spot of grass in a Cambridge college garden.

The Cambridge Shakespeare Festival is still running this week with its final performances of Timon of Athens ending on 29 August in Robinson College Gardens. This weekend is pretty well your last chance of seeing some outdoor Shakespeare for another year, so make the most of it.

This entry was posted in Shakespeare on Stage and tagged Andrew Muir, Cambridge, Dell, festival, outdoor, Shakespeare in Cambridge, summer. Bookmark the permalink.

One Response to Outdoor Shakespeare