Arms and armour on the stage 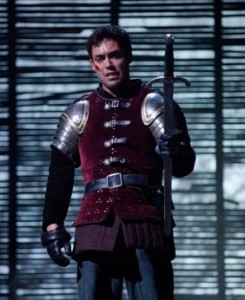 It’s rare for those who work behind the scenes in any entertainment industry to receive any attention from the media, so it was a great pleasure to hear Kirsty Lang’s feature on Alan Smith, the RSC’s Head of Armoury, on Friday 18 September 2015’s Front Row for BBC Radio 4. The RSC is the only theatre with an in-house armoury where armour is specially made and fitted, as well as large costume department which, according to Alistair McArthur who heads the Costume Department, “make all its costumes, hats, masks, jewellery and even underwear in-house”. It’s great to see the work of these immensely skilled people acknowledged in this way.

The reason for the interview is that the RSC’s latest production of Shakespeare’s Henry V is just opening, with Alex Hassell playing the title role. Listeners will probably not be surprised to hear how much putting on the “super-hero kit”, including the complicated and bulky armour, gives Hassell extra confidence when getting into character.

Alan Smith clearly knows his heraldry and the history of weapons, but listeners might be surprised to hear him talking about how stage armour is made, not always of metal, but mostly of plastic or leather. You might also like to see a short video of Smith from the RSC website, demonstrating some of the skills needed to create armour.

After he’s made the armour, it gets sprayed with mud in the “mud and blood room”. Just as costumes often have to be broken down to look worn, armour has to look as if it’s been through a battle. I’ve not been able to find the source of the story, but I remember reading that a new employee during the Benson era, finding Benson’s Henry V armour looking dull, polished it up. When Benson walked onstage the armour not only looked brand new, it was so bright under the theatre lights that it dazzled the audience. When making costumes for the theatre there are many things to take into account, not least that they look different under the artificial stage lights. In his book Benson and the Bensonians, J C Trewin quotes a review by C E Montague of an outdoor performance regretting how some elements of theatrical illusion, including the “tinny stage armour”, fail to convince when out in the open air. 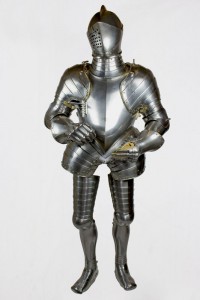 1590 Suit of armour made in Greenwich. Royal Armouries

Frank Benson’s armour was made of metal, even if rather thin. Just as today, stage armour had to be both relatively cheap and light. Henry V was one of Benson’s favourite roles that he continued to play for around thirty years. As well as being heroic and inspirational, his Henry was athletic. Again in Benson and the Bensonians, actor Darby Foster is quoted recalling how Benson “would use a vaulting pole after the Harfleur speech, and leap in full armour from the stage to the French ramparts, a distance of nine or ten feet”.

Modern armourers are mostly employed to create armour and weapons that look like the real thing, but are to be used in films, for TV, theatre and re-enactments. A quick search of the internet will show, however, that interest in medieval weaponry is high. The Royal Armouries have bases at the Tower of London, Leeds and Portsmouth. The exhibition at the Tower of London includes the Line of Kings, a spectacular display where suits of Royal armour are on display, seated astride wooden carved horses. One of the exhibits is the 1590 suit of armour pictured, made in Greenwich near London.

In New York, the Metropolitan Museum of Art contains a fine collection of armour, including this set of Italian armour dating from 1400, almost exactly the same time as the historic Battle of Agincourt.

Suits of armour can be beautiful objects: many of those created during the Elizabethan period were more for show than for use. The weapons created at the time, though, are a reminder of the horrific reality of medieval and early modern warfare, with swords, axes and maces designed to inflict terrible wounds in hand to hand fighting. I remember a few years ago seeing a collection of weapons at Arundel Castle in Sussex: halberds, spears and pikes, vicious objects with long handles to allow them to be used at a distance.

If you want to find out more, they’re holding an event focusing on armour and weapons at Arundel Castle on 28 and 29 October, entitled Normans and Crusaders in the Keep.

It’s all a long way from the work of the stage armourer, where the priority is to make sure nobody gets hurt: the armour is easy to wear, the swords blunted. It is only theatre, but it’s still important to be convincing, to remind the audience of the human price of war even as they are being safely entertained.