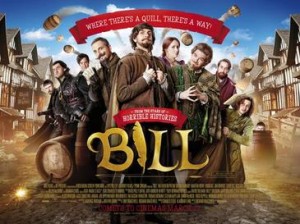 There’s a real “back to school” feel around now with evenings drawing in and a chill in the air. A great moment then to get cheered up with the latest film about Shakespeare, Bill the Movie, released on 18 September 2015.

It’s been put together by the team responsible for the TV series Horrible Histories, also responsible for Yonderland which I confess has passed me by. Audiences won’t be expecting anything too reverential: the Wikipedia page explains it will be “maintaining the familiar character-and-costume driven comedy style”. Ben Willbond, one of the pair responsible for the screenplay says “we cooked up a really nice plot” and his working partner Laurence Rickard describes it as “a hundred different brands of idiocy…We staunchly defend the idiocy”.

The plot revolves round an imaginary take on Shakespeare’s lost years, that period after his twins were born in Stratford and before he turned up in London. Nobody knows for sure what he was doing, but he must have spent at least part of this seven-year period getting a grounding in writing and performing. The co-writers are “playing with history, just as Shakespeare did, for the entertainment of the audience”. The great thing about the lost years is “we can tell a fun story without trampling on the facts – it gives us licence to take William Shakespeare on a truly ridiculous caper, yet end with him becoming the man the world knows”.

In the film, “hopeless lute player Bill Shakespeare leaves his family and home to follow his dream.” As you might guess, the team have taken their cue from Monty Python. This website gives a synopsis: “The story is an eccentric mix of blood-thirsty kings, ruthless spies, broken romances and a devious scheme to blow up Queen Elizabeth I. It’s a very different take on the Bard’s story, one that’s set to have audience in hysterics and leave historians scratching their heads.”  Here’s the trailer.

Just in case this doesn’t persuade you to go and see the film, perhaps you might be swayed by some of the great locations in which they’ve filmed: York Minster, Skipton Castle, Stowe School, Weald and Downland Open Air Museum in Sussex and, naturally, Shakespeare’s Globe.

The live performances are by definition the same in each Picture House. Coming up in the next few months are:

15 October: Benedict Cumberbatch in Hamlet from the Barbican Theatre. 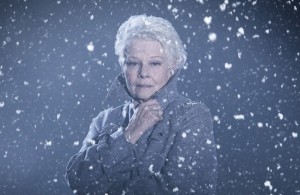 26 November: Rob Ashford and Kenneth Branagh’s new production of The Winter’s Tale starring Branagh as Leontes and Judi Dench as Paulina. Booking is open for Picture House members only until Friday 18 September when it opens to the public.

These are all the live dates. Many of them are offering Encore performances but these vary from one Picture House to another so check your local cinema. There may also be additional performances: as well as Encores of most of the above, in Stratford they are repeating Coriolanus with Tom Hiddleston on 24 September.

For some autumnal Shakespeare study, if you aren’t one of the 27,000 people who has already taken part in it, or even if you have, the Shakespeare and his World online course is being run again for ten weeks from 5 October. This excellent course is introduced by Professor Jonathan Bate, and is a collaboration between the University of Warwick and the Shakespeare Birthplace Trust. Like all MOOCs, it is free, and you can find out how to join on the FutureLearn site.

One Response to Shakespeare on-screen news