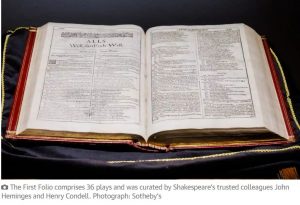 The First Folio being sold in 2022

On 7 July 2022 a copy of Shakespeare’s First Folio will be sold in New York. It’s estimated that it will sell for “only” $2.5 million. The record-holder is the copy sold, again in New York, in October 2020 which went for $8.4 million (£6.4 million). This was complete, and in exceptional condition. It was bought by a private collector. The one being sold now is not complete, lacking the portrait of Shakespeare, and shows signs of being read over a long period. The book has spent most of its life in Scotland. The Gordon family acquired the copy soon after its publication in 1623 then it passed through several other hands before being sold to a bibliophile in Chicago in the 1960s.

there are 17th-century manuscript annotations, doodles, ink spills and markings across over 30 pages in at least five different hands, mostly from the Gordon family… Three members wrote their names: John Gordon (at least five times), Joan Gordon (twice) and Alex Gordon (once), a common practice throughout history. There are fragments of prayers, verse and even mysterious lines from a a “John Frasere”, a speech asking for Herculean strength “to beat him That let my love be stolen away when I was sliping”.

Modern readers might be surprised to find that these manuscript additions in such a valuable book only rarely relate directly to Shakespeare’s work.

Public collections are unlikely to have sufficient funds to purchase First Folios so it is likely that this one will remain in private hands. Around a third of existing copies are in the Folger Shakespeare Library in Washington, DC, purchased by wealthy oil-man Henry Clay Folger before the foundation of the Library. In recent years the Folger Shakespeare Library has made its collections of Folios available to more people by sending copies out on tour around the USA. 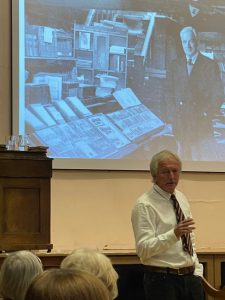 Folger was obsessed with collecting Shakespeare-related material including Folios, and from the 1890s spent over thirty years chasing them down. Book dealers knowing of his interest must have been thrilled to acquire a First Folio. The Shakespeare Club of Stratford-upon-Avon’s May meeting was a dramatized presentation on the subject of Captain William Jaggard who opened a bookshop, The Shakespeare Press, in Stratford, and his son Gerald who continue to run it after William’s death. I’ve written before about Jaggard. The organisers of the event were Jaggard’s grandchildren Andy Jaggard and Anthea Carter who are now working on a book that will tell the story of their “remarkable, difficult and eccentric” ancestor and his shop. Jaggard became well known to professional Shakespeareans including Sidney Lee though he fell out with locals. One of the many stories they told was about Jaggard’s attempt to sell Henry Clay Folger a copy of the First Folio. Andy and Anthea had no proof of the truth of this story that they had been told until recently when the Folger Shakespeare Library uncovered a series of letters between Henry Clay Folger and William Jaggard shedding light on the negotiations which, sadly for Jaggard, came to nothing. 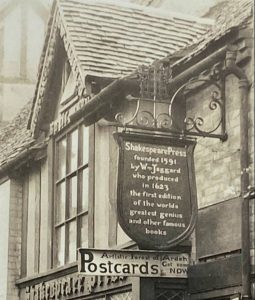 The Shakespeare Press, managed by William, then by his son Gerald, was a notable element of the Stratford-upon-Avon scene from 1910 to 1964. The building in Sheep Street remained empty for several years before being completely restored, and it is now the Vintner Restaurant.

I’ve written posts about various aspects of the First Folio before:

This about the issue of selling Folios in general

Finally, In this video you can see the copy of the Folio being sold in July 2022.