Health and illness in Shakespeare 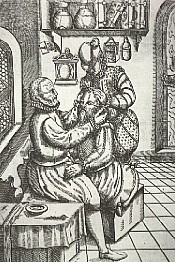 An Elizabethan doctor at work

Shakespeare’s interest in all things medical is well known, and Sujata Iyengar’s recent book Shakespeare’s medical language – a dictionary, published by Continuum, is a successful addition to the literature on the subject, both a fascinating read and a valuable reference work.

She casts her net wide, exploring Shakespeare’s own references to medical matters, the work of medical practitioners, symptoms, cures, and remedies, and the development of theoretical medicine.

Part glossary, part encyclopaedia, the book’s written in an easy to follow style, cross-referencing words with their own entries printed in bold, encouraging the reader to flip around the book. Most entries are in three parts: a medical description of the subject, Shakespeare’s references to it, and contemporary sources.

It’s easy to get distracted by some of the fascinating snippets of information. Did you know, for instance, the “galled goose of Winchester” at the end of Troilus and Cressida, is a reference to prostitutes in Southwark? 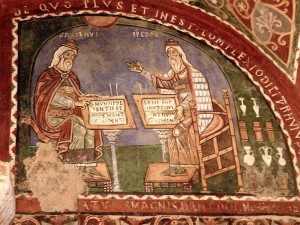 Galen and Hippocrates, from a 12th century mural

No matter how good the content, books can be let down by poor finding aids, such as inadequate or non-existent indexes (you can tell I’m a librarian). This one contains not just an index, a feature many would think unnecessary in a dictionary, and extensive bibliographies, but a list of medical terms. The concise introduction is genuinely useful and the book includes a clear explanation of the difference between Galen’s popular theory of the four humours using herbal remedies and bleeding as against Paracelsus’s more modern ideas about germs as external sources of infection and chemical medicines as cures. Shakespeare shows an awareness of both men and their theories.

You could use the book as a glossary as you read a play: the entry on falling-sickness, for instance, mentioned in Julius Caesar, links the word with others used by Shakespeare: apoplexy, dizziness and palsy. It then directs you to three pages on epilepsy, lists other plays including sufferers (Othello and Macbeth), and quotes the description of Julius Caesar’s epileptic fit:
when the fit was on him, I did mark
How he did shake: ‘tis true, this god did shake;
His coward lips did from their colour fly,
And this same eye whose bend doth awe the world
Did lose his lustre: I did hear him groan.

One of the first entries I saw when I opened the book was “untimely ripp’d”, the term which Macduff uses to describe his caesarean birth, and which, the book reminds us, also applies to Posthumus in Cymbeline. 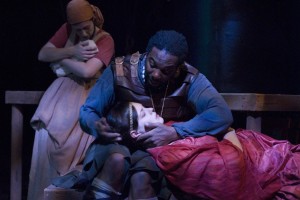 Pericles and Thaisa, from the Seattle Shakespeare Festival production

Reading the book, I was struck by the large number of references to childbirth in Shakespeare. Iyengar makes it easy to link these together, whether they are references to parts of the body, like breasts and wombs, to abortions, births and child-beds and to wet-nurses, midwives and milk. Some references are to actual births: “A terrible child-bed hast thou had, my dear” says Pericles when he believes his wife to have died in labour during a storm at sea. Also included, though, are allusive references to birth. King Lear’s curse on his daughter Goneril wishes her sterile, and in Julius Caesar, Messala mourns Cassius’s death, in which, believing the battle to be lost, he asked his friend to kill him. Personified as error, this mistake is likened to a tragic childbirth.
O hateful error, melancholy’s child,
Why doest thou show to the apt thoughts of men
The things that are not? O error, soon conceived,
Thou never comest unto a happy birth,
But kill’st the mother that engender’d thee!

Starting from Shakespeare’s words, moving from them towards modern definitions, has many advantages. Iyengar doesn’t attempt to link his every mention of illness to a specific modern one, nor does she assume that Shakespeare’s use of medical terms is consistent. Importantly, there is no patronising assumption that twenty-first century western medicine, which separates body and spirit, has all the answers. We may still have much to learn from less sophisticated societies, including Shakespeare’s.

Full of interesting content and clearly organised, this book will easily earn its place on my bookshelves.

5 Responses to Health and illness in Shakespeare