Sight and blindness in Shakespeare 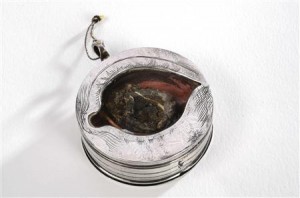 One of the most striking items discussed in the BBC’s radio series Shakespeare’s Restless World earlier this year is the reliquary containing the eye of an executed Jesuit priest. It appealed in a number of ways: its gruesome history, the fact that it was taken from a corpse, the artistry and beauty of the object, made of silver with an eye-shaped window. The object has further impact because of its connection to the real historical event of the 1605 Gunpowder Plot and the persecution of Catholics. The priest, Father Edward Oldcorne, was executed in April 1606 in the aftermath of the Plot by hanging, drawing and quartering. You can listen again, read a transcript and look at the photographs here.

Its most obvious link to Shakespeare is that political one, the circumstances surrounding Macbeth. But it also has resonances for anyone interested in Shakespeare simply because of the many references Shakespeare makes to eyes and sight. The most striking occur in King Lear where the physical act of seeing is a metaphor for understanding and self-awareness. Sometimes words aren’t enough, and then Shakespeare translates the metaphor into action. After dozens of references to sight and blindness, Shakespeare stages the horrific scene where the Duke of Gloucester has his eyes ripped out onstage. Although Gloucester has misjudged one of his sons because he has been deceived by the other, it’s the King who has made the much larger mistake of banishing the daughter who loves him: “Hence and avoid my sight”, in favour of the two who just say they do. Behind that action stands a whole series of misjudgements. He has, as one of his daughters says, “ever but slenderly known himself”. “See better, Lear, and let me still remain/The true blank of thine eye” warns Kent.

It’s not just in King Lear that eyes are important. Elsewhere they are the organs of sight but also the windows of the soul. In classical medicine sight was the most valued of the five senses. In Shakespeare’s time it was suggested by some scientists that eyes sent out spirits themselves, that might do harm, though in As You Like It the power of Phoebe’s eyes to hurt her lover Silvius is the power of rejection.
Thou tell’st me there is murder in mine eye:…
Now do I frown on thee with all my heart,
And if mine eyes can wound, now let them kill thee.
…Now mine eyes
Which I have darted at thee, hurt thee not,
Nor I am sure there is no force in eyes
That can do hurt.

For those in love, eyes have a different meaning. Looking into another’s eyes, one sees one’s own reflection, and in The Tempest, the lovers “chang’d eyes”. There are far too many examples of Shakespeare’s mentions of eyes to list them all, but it’s worth mentioning that the havoc of A Midsummer Night’s Dream is caused by the flower love-in-idleness making people fall in love with the next living thing they see.

Blindness was, and is, a terrible affliction. In King John Hubert was supposed to inflict it on young Prince Arthur in order to prevent him being capable of taking the English throne.  For Shakespeare’s contemporaries, illnesses affecting the eyes were common, and ointments such as the egg-whites applied to soothe Gloucester’s eyes in King Lear  were standard treatments. Unlikely as it sounds, cataract surgery was attempted, and during the seventeenth century prosthetic glass eyes were developed. 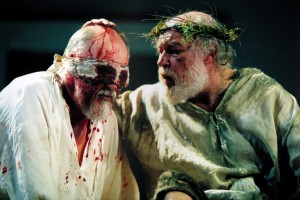 Michael Cronin as the blinded Gloucester and Timothy West as Lear

Lear’s suggestion that Gloucester gets glass eyes could refer to these, or to spectacles, also known as eye-glasses. This blog sets out the history of spectacles, which were relatively common by Shakespeare’s day. The Worshipful Company of Spectacle-Makers was formed in 1629, only a few years after his death. Spectacle-wearing was associated with age. In As You Like It, Shakespeare’s old man is “the lean and slipper’d pantaloon,/With spectacles on nose”, and Benedick in Much Ado About Nothing” is still young enough to be able to “yet see without spectacles”.

The eye reliquary now on display in the British Museum as part of their exhibition Shakespeare: staging the world is a reminder of Shakespeare’s inventive references to eyes in both tragedy, comedy and romance.