Shakespeare’s Coriolanus and the bawdy court of Stratford 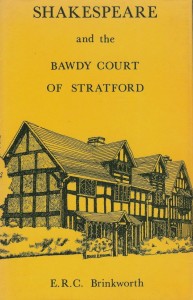 After reading about the government of the town in Shakespeare’s day as revealed in Mulryne’s book The Guild and Guild Buildings of Shakespeare’s Stratford I decided to find out more about a related subject, the Ecclesiastical Court which was held at Holy Trinity Church, and which was the subject of a book Shakespeare and the Bawdy Court of Stratford.

A whole series of records of the hearings that had taken place in the church were discovered in the early sixties, the announcement taking place with excellent timing in May 1964 in the middle of the celebrations of the Quatercentenary of Shakespeare’s birth.  The documents were found somewhere they wouldn’t be expected to be, in Kent.

The author of the book, E R C Brinkworth, spent several years methodically examining the manuscripts, publishing his book in 1972. The book was solidly aimed at the target of existing Shakespeare biographies. As the cover blurb of the book tells us, he was able to produce “not myths, imaginings or far fetched theories, but a mass of solid facts”. Only a couple of years later came a masterful study of Shakespeare’s life through the use of documents, Samuel Schoenbaum’s William Shakespeare: a Documentary Life.

The records of the Ecclesiastical court shed light on the moral life of the town in Shakespeare’s period. It was the concentration on cases of sexual immorality that led to these being called “Bawdy Courts”. The court also dealt with lesser transgressions not recorded anywhere else.

The records consist of two books covering the period 1590-1616 and 1622-1625. It’s tantalising to speculate that if earlier records had survived Shakespeare himself might have appeared, particularly if he was the wild-oat-sowing youth that biographers have assumed him to be. But both his daughters feature, even if in Judith’s case it is indirectly, as do many people we know Shakespeare was friendly with.

The most regular offences dealt with by the court were non-attendance at church and church-papists who unlike Catholic recusants attended church but failed to receive communion. Shakespeare’s daughter Susannah appears on one of these lists, but it’s hard to know how much can be read into this.

Other rules included the observance of the sabbath. Tradesmen often opened their shops on Sundays, while farmers and their workers sometimes broke the sabbath (and were let off) during harvest time. Misbehaviour and blasphemy in church were punished: Elizabeth Wheeler sounds like a colourful character: she was brought before the court in 1595 for brawling and her comment to the court was “A plague of God on you all, a fart of one’s arse for you”. She was excommunicated.

The most interesting cases, of course, are those relating to fornication and adultery, of which there seems to have been a good deal, and one of these cases intimately involved the Shakespeare family. In February 1616 his daughter Judith married Thomas Quiney, but only a few weeks later the court records that he had had “carnal intercourse” with Margaret Wheelar, a transgression impossible to conceal as only a few days before, she and her baby had died in childbirth. This scandal must have been the talk of the town, and this record helped to explain the changes Shakespeare made to his will between January and March. In it he made specific allowances for his daughter and any children she might have to ensure they had an income independent of her unreliable husband.

The court could order a variety of punishments: people could simply be admonished, but the humiliating ritual of penance was occasionally ordered. The penitent person had to confess their sin, recounted in detail, while standing on a stool in the main aisle of the church at service time. In the most serious cases they wore a white sheet, with bare head and feet, holding a white rod. Some had to do this on more than one occasion. And some had to do penance like this in the market place on Market Day.

This scene of a penitent standing on a stool, clad in a sheet in a public place, is reproduced in Shakespeare’s play Coriolanus where in order to reach the rank of consul Coriolanus has to appeal to the citizens of Rome. It’s a ritual which he finds demeaning: 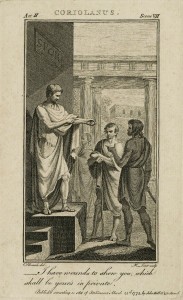 A 1773 image of Coriolanus in the market place

Let me o’erleap that custom; for I cannot
Put on the gown, stand naked, and entreat them,
For my wounds’ sake, to give their sufferage:

Sadly, Coriolanus wasn’t excused, and his arrogance when he was supposed to be humble caused his exile from Rome and ultimately his death. In Stratford, Quiney was sentenced to the full white sheet penance, to be performed on three successive Sundays, but the local priest, the judge of the bawdy court, allowed him to commute the worst of the punishment by paying a fine to help maintain the poor of the parish.

The image of Coriolanus is from the Folger Shakespeare Library’s collections.