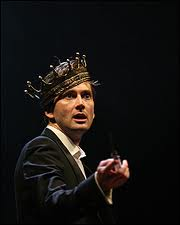 Tucked away on the BBC2 TV schedule at 11.20 on Tuesday evening is the last of the Shakespeare Uncovered series, David Tennant on Hamlet. Not only does it feature David Tennant, whose own Hamlet for the RSC in 2008 was a massive hit, but he takes the opportunity to speak to other notable recent Hamlets Jude Law, Simon Russell Beale and Ben Whishaw. Simon Russell Beale is having quite a Shakespeare summer himself having just played Falstaff in the BBC’s The Hollow Crown series and is now beginning to play Shakespeare’s least-known leading man, Timon of Athens, at the National Theatre.

I mention this particularly because, with all the Shakespeare, not to mention all the sport, this summer the BBC’s scheduling has been pretty erratic. The first two parts of The Hollow Crown were meant to be on at 9pm, but one was delayed by the tennis at Wimbledon. The second two in the series have been scheduled for 8pm, an hour earlier. I was listening in on  #hollowcrown on Twitter on Saturday and it was clear from people’s tweets that many hadn’t got that message. So here’s your warning: on Saturday evening, the culmination of the series, Henry V  begins at 8pm. Don’t be late! 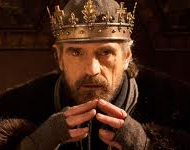 Shakespeare Uncovered has been a fascinating mix, including contributions from Joely Richardson along with her mother Vanessa Redgrave looking at Shakespeare’s women, Ethan Hawke on Macbeth, Trevor Nunn on The Tempest, Derek Jacobi on Richard II and Jeremy Irons on the Henry IV and Henry V plays. The programmes have each been very different, and on Tuesday, it’s David Tennant’s turn to talk about the gloomy Dane. Indications are that it’ll be good stuff.

David Tennant’s Hamlet was filmed for TV and it’s a fair bet that we’ll be seeing a few clips from this version during the show. Just recently there’s also been a discussion going on about the whole subject of filming Shakespeare for TV, sparked off by The Hollow Crown, and perhaps encouraged by the amount of productions like those from the Globe and the National which are now made available to watch in cinemas. This year the Globe to Globe productions, staged from April to June, were also filmed and are gradually being made available on the Space.

But the issue that’s got people going is Richard Eyre’s contention in a recent article that filming stage productions, even fine adaptations like the David Tennant Hamlet and the recent African Julius Caesar, both directed by Gregory Doran, is not the same as, and not as  good as, reimagining the plays for the small screen, as The Hollow Crown has done. 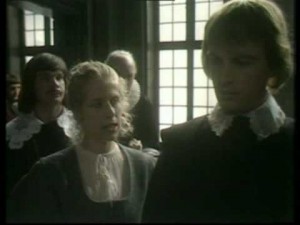 Angela Down as Helena, Ian Charleson as Bertram, in the BBC All's Well That Ends Well

From the end of the 1970s to the mid-1980s the BBC undertook an ambitious filming of all of Shakespeare’s plays for transmission on TV. Respondents to Richard Eyre’s piece on the Illuminations blog have taken widely differing views of these plays. They are often remembered as clunky, studio-bound and unimaginative. But at the time they were a revelation. For many people they were the only Shakespeare they would ever get to see. Hardly anybody had video recorders, and if I remember correctly, the programmes were shown only once with no repeat. And only the most popular plays were released on video. Ironically some of these were the poorest productions. So it’s only within the last few years since the whole 37 have been released on DVD that some of the best, like Pericles, have been seen again.  The Shakespeare Centre Library acquired the complete series as they came out and people came from all over the country to see them. 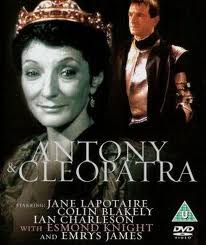 Although the productions were not as glamorous as The Hollow Crown many of them featured top-notch actors:  Ian Charleson as Bertram, Jane Lapotaire as Cleopatra, Felicity Kendal as Viola, Alan Howard as Coriolanus, Mike Gwilym as Pericles, and without this series there would be no recordings of some of these at the height of their powers. It’s now commonplace for theatre companies to record their productions, even if the recordings aren’t anything like broadcast quality, but at the time of the BBC series neither the RSC nor the National Theatre were recording their output. 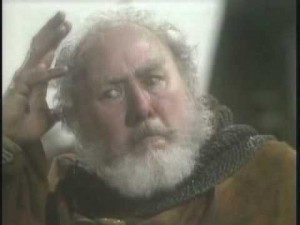 Anthony Quayle as Falstaff from the BBC production of Henry IV

The series also featured great veterans like John Gielgud as John of Gaunt and Anthony Quayle as Falstaff. Quayle had been a renowned Falstaff on stage back in 1951 and although thirty years later his performance was probably only an echo of the original, these recordings have ensured that there is some evidence of these performers’ work.

I’ve been asked whether The Hollow Crown and Simon Schama’s Shakespeare will be screened in the USA, or released on DVD. I’ve done a bit of detective work and the answer seems to be yes, to all questions. But you may have to wait until the end of this year or the beginning of the next.